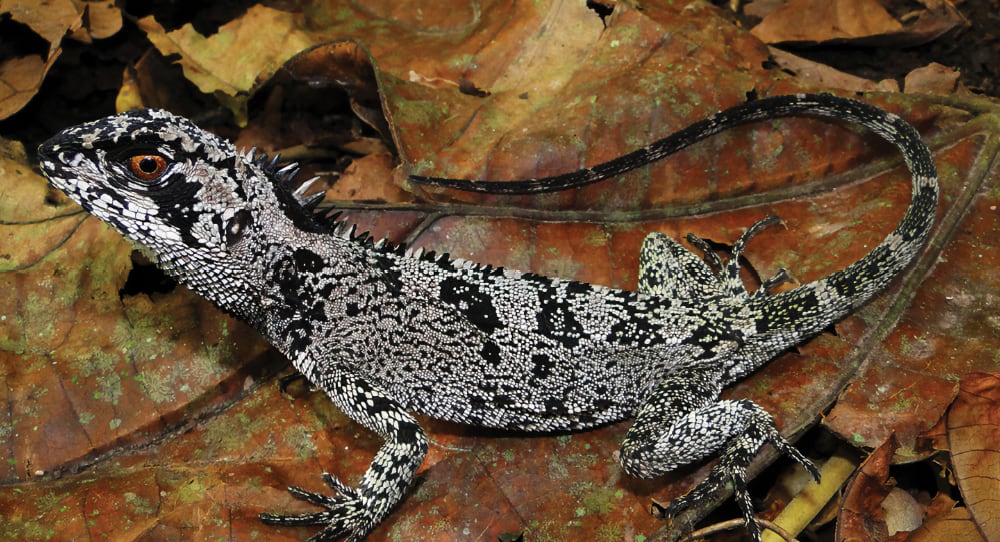 Researchers in Peru surveyed an area from the Río Huallaga Basin from 2011 to 2018 and discovered a new wood lizard species of the genus Enyalioides that sports a variety of colorations based on the sex. Males can be brownish turquoise in coloration or white with black sprinkled throughout, while females can be a drab earthy brownish coloration.

“The Huallaga drainage flows north from the Cordillera Oriental of central Peru and has an extension of 1,138 km, which makes it the largest tributary of the Marañon river,” the researchers at the Instituto Peruano de Herpetología, Rainforest Partnership, and the Centro de Ornitología y Biodiversidad, said in their paper. “This basin harbors a great variety of ecosystems, including the Yugas, which are considered a shelter of endemic birds, mammals and amphibians.”

“In an effort to improve our knowledge on the herpetofauna of the Huallaga river basin, we carried out field surveys between 2011 and 2018, which led to the discovery of a new species of wood lizard described in this paper. Among hoplocercine lizards, wood lizards (Enyalioides) represent one of the South American lizard groups with the highest species discovery rate (corrected for clade size) of this century. Our discovery increases to 16 the number of known species of Enyalioides, of which only seven were known in previous centuries.”

“We believe Enyalioides feiruzae might have established as a separate species after it got geographically separated from a very similar lizard, Enyalioides rudolfarndti, possibly as a result from tectonic activity and climatic oscillations that occurred from the Late Oligocene to the Early Miocene,” the researchers said in their paper.

The complete paper, A new species of wood lizard (Hoplocercinae, Enyalioides) from the Río Huallaga Basin in Central Peru, can be read on the Evolutionary Systematics website.