Study shows Pelodiscus sinensis expelling urea via the mouth rather than by using its kidneys.

Chinese soft-shelled turtles (Pelodiscus sinensis) pass urea through the mouth, according to a recently published study in The Journal of Experimental Biology 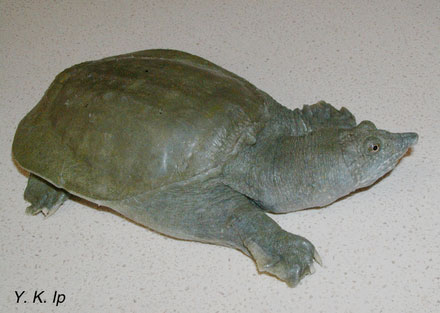 The researchers, led by Y. K. Ip, bought turtles from a Chinatown wet market (where fruits and vegetables, fish and other live animals can be purchased) in Singapore and kept them in the water for six days. They measured the amount of urea that passed into the turtles urine and measured just six percent of the urea passed through the turtles kidneys. They then took the turtles out of the water and placed them in an enclosure that had puddle of water in which they could dip their heads. The researchers calculated the rate of excretion through the mouth by taking measurements of the urea that accumulated in the water. It was determined that the excretion rate of the urea through the mouth was as much as 50 times higher than the excretion rate through the cloaca. They then injected urea into the turtles and took measurement of the blood and saliva-urea levels and determined that saliva-urea levels were 250 times greater than in the blood.

The researchers believe that the soft-shelled turtles excrete urea through their mouths because of the salty environments in which the turtles live. They say that because animals that excrete urea have to drink a lot of freshwater it becomes an issue when the only water available is salty, and even more so for reptiles that can't excrete the salts. And since the expulsion of urea in the mouth and throat only involves rinsing the mouth with ambient water, drinking brackish water can be avoided.