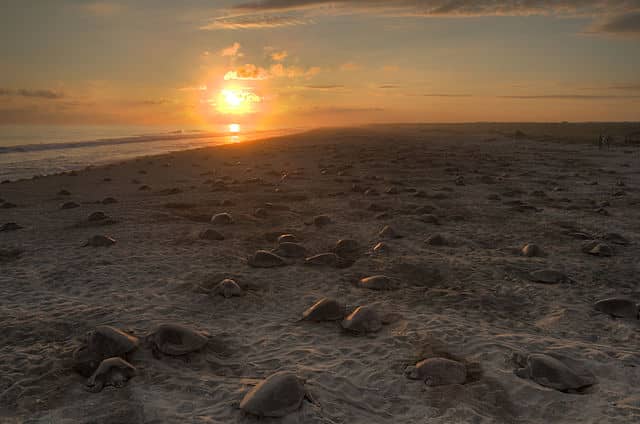 Hundreds of thousands of female olive ridley sea turtles (Lepidochelys olivacea) gather each year on the beaches of Costa Rica's Ostional National Wildlife Refuge to lay their eggs, and biologist Vanessa Bézy, who has been studying the reptiles arrival for years, captured drone video footage of the arrival, or arribada, in November 2016.

The day she recorded the footage she had no idea that it would arguably be the largest number of sea turtles ever captured on video.

“I immediately knew there was something special going on,” Bézy told National Geographic. “To this day I’m still blown away by the video. They look like bumper cars out there.”

Bézy told NG that she released the footage due to the negative impacts the turtles are facing, including development, and the mass throngs of tourists who gather on the beach to watch the phenomenon, known as the arribada, or mass arrival, each year. The World Wildlife Fund says the refuge is “one of the two most important areas in the world for nesting of the Olive Ridley turtle.” In fact, in 2017, the Costa Rican government was upset by the behavior of the thousands of tourists who came to the refuge to watch the turtles nest. There were so many tourists, according to reports, that some sea turtles turned away and did not lay their eggs. 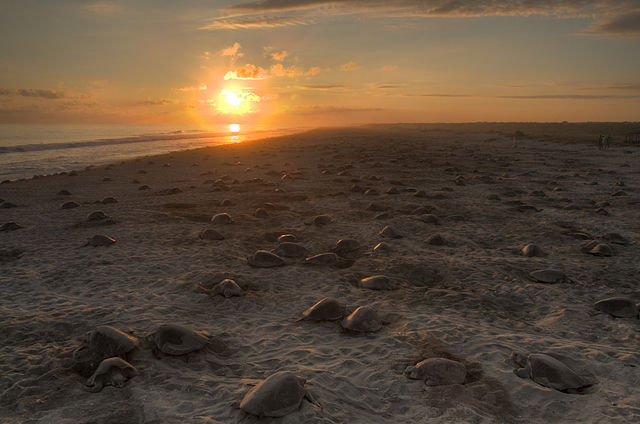 Oaxaca, Mexico is the other area where sea turtles nest en masse.

Bézy, a National Geographic Explorer, says she hopes that the video helps to protect the area in which these turtles congregate to lay their eggs, and to show how unique the beach is too these reptiles.

“This is the only time I’ve seen a video capturing this phenomenon in the water,” Roldán Valverde, scientific director of the Florida-based Sea Turtle Conservancy and a biologist at Southeastern Louisiana University, told NG. “Most of the photography documenting this occurs on the beach.”

The drone footage is rather quite amazing, with the report saying about 250 turtles per square kilometer surfacing, with potentially more just beneath the surface.

According to the report, development is already taking place in Ostional, and Bézy says regulations need to be implemented in order to protect the sea turtles, which arrive between August and October. Currently, development is not permitted within the first 200 meters of the beach.

The Ostional Wildlife Refuge was established in 1982 to protect sea turtles and is the only place in the world where it is legal to harvest and sell sea turtle eggs. The practice, which was put in place with input from scientists in the 1980s enables locals to harvest the first wave of turtle eggs which the government says are often destroyed by the second and third wave of turtles that nest on the beach

Hopefully those who see the video will be inclined to work to protect these animals elsewhere around the world.