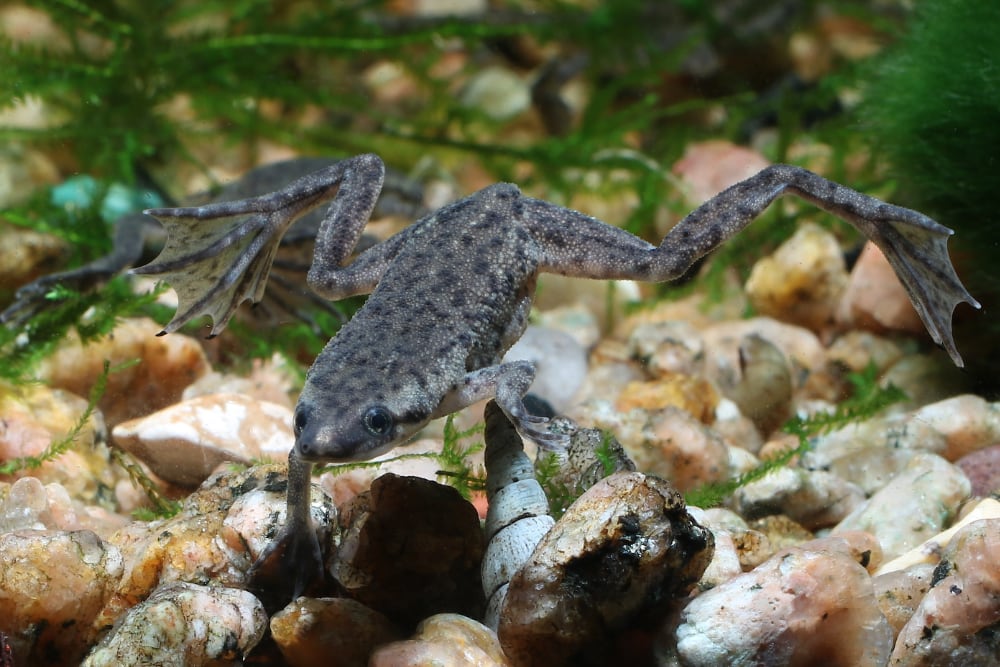 Caring For The African Dwarf Frog

When people hear the word frog, they picture a giant green frog with bulgy eyes hopping through the grass. Or perhaps perched upon a tree branch croa

When people hear the word frog, they picture a giant green frog with bulgy eyes hopping through the grass. Or perhaps perched upon a tree branch croaking at the edge of a stream. That was how I pictured frogs before I was introduced to African dwarf frogs for the first time and started raising them five years ago. Although these unique and fascinating creatures have made their way into the common pet trade over the past 40 years, they are still less commonly known than bullfrogs, treefrogs and toads. For those of you out there who are considering adopting an African dwarf frog and want to give it the proper care it needs to live a long, happy, and healthy life, here is some helpful information to get you started.

The Origins of the African Dwarf Frog

African dwarf frogs were first discovered in rivers, streams, puddles, and shallow ponds in various regions throughout Central Africa in the late 19th century. They are members of the Hymenochirus genus of aquatic frog species and are easily confused in appearance with the other frog species in their group, the African clawed frogs. While these fully aquatic amphibians both belong to the Pipidae family and may appear to look similar, they do have different physical and behavioral traits, which are important for beginner African dwarf frog owners to identify prior to adoption.

There are several distinct features that make it easy to identify male and female African dwarf frogs. Male African dwarf frogs are typically smaller in size as they mature, develop small glands behind their front legs called post-axillary subdermal glands, have a small tail, and “buzz” quite loud when they are excited or trying to attract their mates. Females are typically larger in size with pear-shape bodies as they mature, develop longer tails, and aren’t known to buzz. When the males buzz, it is typically at night when they are most active. African dwarf frogs are nocturnal. In the wild, they hunt for food at night and rest during the day. 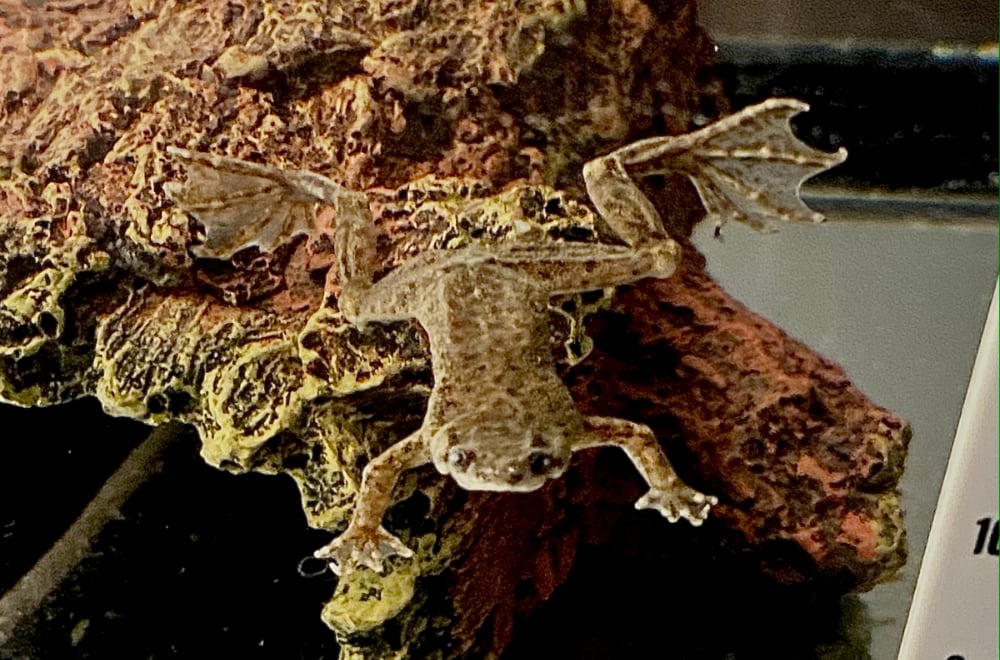 Choosing the Right Aquarium for Your African Dwarf Frog

As with all herps, maintaining a proper living environment for your African dwarf frog is key to preventing stress, disease and a shortened life. The following tips for properly setting up and maintaining their living space are highly recommended:

An African dwarf frog’s diet should contain a high protein and well-balanced selection of food consisting of specialized aquatic frog sinking pellets, freeze dried bloodworms, frozen brine shrimp, daphnia, and live blackworms. African dwarf frogs have poor vision and rely on their sense of smell and touch to eat. They have no tongues or teeth to help them chew, so the food that they consume should be cut up in small pieces and fed to them in small portions.

They can be fed off a ceramic terra cotta plate inside the aquarium, or hand fed from a pair of tweezers. Since their vision is very poor, their food should be dropped in front of them so they can use their senses to find it quicker. It is best to feed them in the evening as this is when they hunt for food in their native habitats. Their stomachs are tiny, so feeding them once a day or every other day is best for their digestion. Any leftover food in the aquarium should be scooped out as soon as possible to prevent the water from getting dirty. Overfeeding could lead to stress, disease, and excessive waste build up in the water.

When selecting food, be sure to read the labels on the containers prior to purchasing them. They should be aquatic frog specific and contain at least 40-50 percent protein. Zoo Med, Josh’s Frogs and Omega One are some of the manufacturers that offer foods specific to African dwarf frogs.

Choosing the Best Tankmates for Your African Dwarf Frog

Signs of a Healthy and Unhealthy African Dwarf Frog

It is important to be able to identify the signs of a healthy and unhealthy African dwarf frog before you purchase them and while they’re living their lives at home in the aquarium.

Signs of a healthy African Dwarf Frog include:

Signs of an unhealthy African dwarf frog include:

With proper care, African dwarf frogs can live between five and 10 years in captivity. Some are known to have lived 10 to 15 years.

African dwarf frogs can be seen floating around at the top of the water periodically with their arms and legs stretched out. Rest assure that this is just their way of being lazy and is perfectly normal behavior. This is called, the Zen Position. If they appear to be doing this constantly and are unresponsive to feeding time or any other type of interaction, this could be a sign that they are sick. 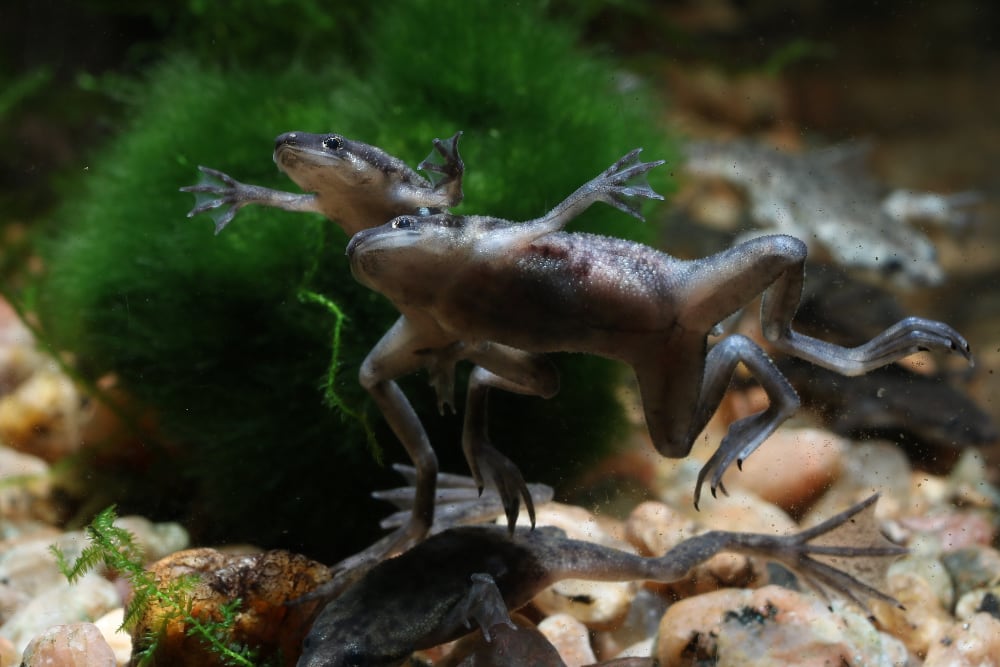 African dwarf frogs typically shed their skin two to three times a month. Before they shed their skin, their bodies will appear whitish. African dwarf frogs shed their skin for various reasons. The main reason is because of their natural growing process. If you see them eating their shed afterwards, this just means that they are consuming the leftover nutrients they lost during the shed. It is perfectly normal, so the shed can be left in the tank. They can shed for unhealthy reasons also, which could be due to fungal infections, poor water quality or drastic changes to water parameters. Be mindful of this when you perform water changes, feed your frog, or add specific substrates and decorations to the aquarium.

If they are shedding more than a few times a month, there could be a water quality issue going on. Healthy shed should appear white and come off almost entirely in one piece. Unhealthy shed will appear discolored and come off in little flakes. Sometimes the frogs will struggle to get the unhealthy shed off. Another sign of unhealthy shedding is if the frog’s skin doesn’t return to its natural dark shade once the shed comes off. If their bodies still appear white, then this is a sign that your frog is sick.

African dwarf frogs cost anywhere between $1.99-$3.99 and can be purchased at your local fish store or online.

African dwarf frogs can carry diseases on their bodies such as Salmonella, which can be transmitted to humans if they are handled in an unsafe manner. Wearing gloves and washing your hands before and after handling them or any amphibian and reptile is the best way to avoid catching any diseases.
Although they are very friendly and make great pets, children especially should be supervised while interacting with African dwarf frogs. For more info on Salmonella prevention, visit https://www.cdc.gov/healthypets/pets/reptiles/safe-handling.html.