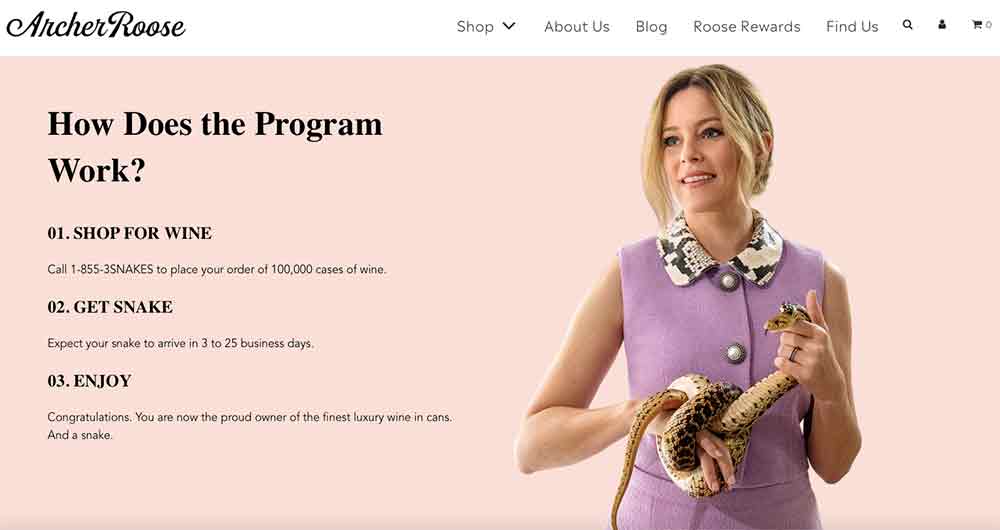 The purported giveaway was halted due to potential state and federal violations.

We here at REPTILES aren’t sure what Archer Roose, a purveyor of canned wines, was thinking when it offered its Snake Rewards Program. Was it some kind of joke or was the canned wine company seriously going to mail live snakes? The program, which has since been retracted in a video from co-owner and movie star Elizabeth Banks, offered a free live snake to anyone who placed an order of 100,000 cases of the company’s canned wine.

According to the Archer Roose website, all one had to do to get the live snake was order the 100,000 cans of wine and you would get your live snake within three to five days. The site features a photo of Banks holding a non-venomous gopher snake, but the snakes that a would be purchaser of the canned wine could apparently choose from a variety of snakes. The pictures on the website showed all venomous species with the exception of a Burmese python.

In Banks’ video announcing the now canceled program, she quotes the program was legally misinformed and frowned upon and in violation of most state and federal regulations. Shen then goes on to say that “at Archer Roose we take personal safety very seriously. We should not be mailing poisonous snakes. Effective immediately, Archer Roose will terminate the free snake giveaway and will be replacing it with a reptile-free rewards program. We apologize for the inconvenience and also for the snakes.”

Not sure if this was just a big hoax to begin with, but if not, in lieu of the rewards program, perhaps the company could donate some its profits to the Orianne Society, which works to ensure the success of America’s largest and most beautiful snake, the Eastern indigo. Or perhaps the company could help with conservation efforts for the timber rattlesnake, which is listed as endangered in Massachusetts, where Archer Roose is located.

ReptilesMagazine.com reached out to Archer Roose and has not yet received a reply as of yet.