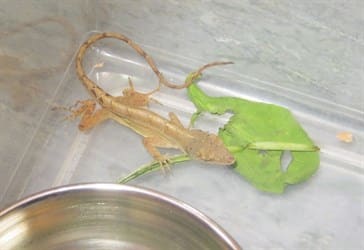 Brown Anole Named Flo-Rida Hops On A Plane To Scotland

The stowaway was found in the luggage of a woman who took a trip to Florida.

What would you do if you vacationed in an exotic locale and found a lizard in your suitcase as you were unpacking from your trip? Would you add it to your collection or turn it in to the SPCA? 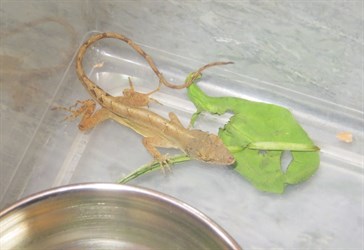 This brown anole hitched a ride from Florida to Scotland.

A woman from Scotland returned from a trip to Florida and when she was unpacking her bags, guess what, she found a brown anole (Anolis sagrei) had stowed away in her luggage. Siouxsie Mackenzie, who found the lizard after unpacking her bags noted that her daughter was quite excited and wanted to keep Flo Rida but Mackenzie thought otherwise, realizing it was a wild animal, so she called the Scottish SPCA, which sent someone out to retrieve it. Flo Rida was then sent to the Aberdeenshire Animal Rescue and Rehoming Centre in Drumoak. The Scottish SPCA offered the lizard to a man in Inverness who runs an exotic animal rescue and charity in Iverness town.

“Flo Rida is a small lizard around two to three centimetres long, said Kyle McWhirr, animal care assistant at the Scottish SPCA’s rescue centre in Drumoak. “He seems to be lively enough, although he is quite underweight.

“We’re very pleased Nick has offered him a new home as we know he has the knowledge and experience to provide Flo Rida with proper care and a suitable environment.”

Brown anoles are one of the most invasive lizards, having been introduced into the United States in the 1970s, Anolis sagrei is found throughout the southeastern United States, including Georgia, Texas, Hawaii, and Southern California. It can also be found on other Caribbean islands and on Taiwan.