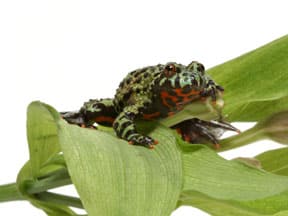 Bombina orientalis is one of the easiest frogs to breed in captivity. 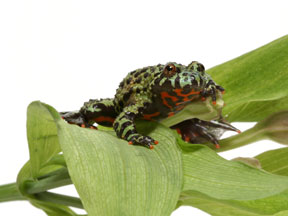 For more consistent breeding, the recommended pre-breeding conditioning is to cool the fire-bellied toads to the 60s° F and reduce the photoperiod to only ten hours of light per day for at least two months. Generally, the cooling period follows the normal cooling trend of climate in a given area, which can be as early as October for northern temperate regions (many herpetoculturists cool down their herps from November 1 to March 1). After this period, return the frogs to normal temperatures and a longer photoperiod (fourteen hours of light a day).

Fire-bellied toads usually breed in the evening, with females releasing eggs as males eject seminal fluid and sperm to fertilize them. These frogs might breed several times during the warm months of the year.

Young female frogs (first-year breeders) produce small clutches of sixty to eighty eggs, but older female frogs can produce up to two hundred eggs that adhere to plants and landscape structures. If you want to raise tadpoles, remove adult frogs from the breeding tank. The tadpoles begin hatching by the third day. For two to three days, the tadpoles hang attached to the sides of the tank or vegetation, still using stored yolk. When they begin free-swimming and start feeding, powdered tropical fish flakes typically work well. After about a month, the tadpoles complete metamorphosis and climb onto immersed plants or the shore. Provide surface plants or ramps to give the emerging frogs access to land.

Initially dark gray with grayish white bellies, the frogs begin to feed on fruit flies and baby crickets a few days after metamorphosis is completed. Adult coloration appears in twelve to fourteen weeks.

Sexing: You cannot determine the sex of a fire bellied-toad from its appearance outside of the breeding season. If you’re lucky, you might witness a male frog call (a soft “oo, oo, oo” sound) or an attempt to grasp a female fire-bellied toad around the waist area (termed amplexus), two reliable indicators of gender. If a group of fire-bellied toads in a tank are in breeding condition, a close examination might help determine their sex. Breeding male frogs develop black nuptial (mating) pads on the insides of the thumb, second finger, and forearms, as well as on the feet.