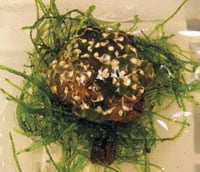 Although commonly kept, mantellas are still only sporadically bred in captivity. This is surprising because, when exposed to the appropriate conditions, some species readily spawn. Mantella aurantiaca is the species most often bred, and it is perhaps the only one that consistently reproduces in captivity. Others are bred here and there, but they deserve more focused attention to ensure their survival and availability in the trade.

The first step to breeding mantellas is acquiring at least one pair of frogs. In general, female mantellas have a more robust body structure, and they are often larger than their smaller, more streamlined male counterparts. Females also do not vocalize, so if you have a mantella that calls, then it is unquestionably male. Frogkeepers report that keeping a large, male-heavy group of mantellas yields the best breeding results. Six to eight males and three females are a good size to start with. Success has also been had with pairs and trios. 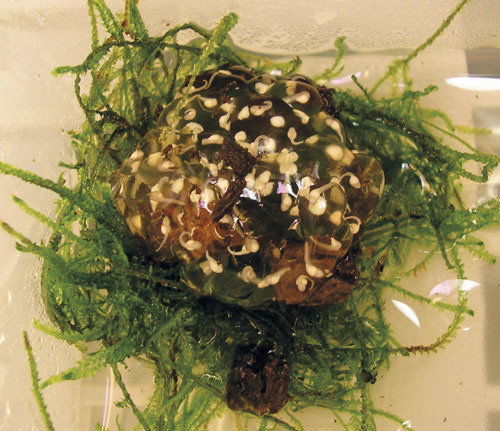 A mantella clutch can include several dozen eggs to more than 100 depending on the species.

Simulating the distinct wet and dry seasons wild mantellas experience in Madagascar is key to breeding them in captivity. I rely on Wisconsin’s natural temperature and humidity fluctuations that occur seasonally in my basement, where I keep my mantellas. Their terrariums dry and cool as much as the room they are kept in does during the winter. Cages are misted only once every five to seven days, and temperatures rarely rise above 72 degrees Fahrenheit from December to March.

With these cool temperatures, the frogs’ metabolisms slow, and they require only small amounts of food. As few as two or three crickets per frog once or twice a week may be adequate during the coldest part of the simulated dry season. Monitor all frogs carefully during this time to ensure they remain healthy during these stressful conditions. As spring approaches and temperatures rise, daily misting resumes. Particularly important during this seasonal transition is heavily feeding the frogs. Use a wide variety of foods, and don’t rely only on fruit flies or a single other convenient food. Crickets, termites, roach nymphs, small spiders, rice-flower beetle larvae and small waxworms are all good choices, and they can be fed to frogs daily. Males should begin to call if they have been cycled properly, and with heavy feedings females soon swell with eggs. Their spherical shapes are outlined in the skin as they develop.

Most often, eggs are deposited in dark crevices or depressions. A piece of cork bark positioned over a clump of moist moss is an irresistible egg-deposition site for most species, but females may also lay eggs under water dishes, dried leaves, pieces of driftwood or film canisters positioned horizontally on the ground. It’s important to keep the cage setup simple if breeding is your goal because finding eggs in a thoroughly planted, elaborate terrarium can be quite difficult. Instead, go for a simplistic layout that limits where eggs can be deposited.

The number of eggs produced depends on the species. A clutch of several dozen to more than 100 eggs is possible. An exception to this is Mantella laevigata. The species individually deposits up to 14 eggs along the water’s edge in a terrarium or within water-filled wells, such as sections of bamboo or film canisters fastened with suction cups in a vertical position to the side of the tank.

Several days after spawning, the pearl-white ova of fertile eggs begin to look as though they are splitting down the center, which is a sign of development. Infertile eggs become discolored, and their shape is distorted. It is common for heavily fed females to produce eggs in captivity without the males successfully fertilizing them.

I use a plastic spoon to dig up and remove eggs from the terrarium, and I transfer them to another aquarium or plastic storage container with one-fourth inch or less of water on the bottom. They should be left undisturbed in this container and covered well, so the humidity level remains near 100 percent. As tadpoles begin to break free from the egg mass during the following week, gradually increase the water level.

An alternative method for raising tadpoles is possible in a large, established terrarium containing a sizeable pond to give them enough room to swim. Allow eggs to develop within the cage, and flush the resulting tadpoles into the water, where they can grow alongside the adult frogs. Upon metamorphosis, the froglets can be removed to separate enclosures, so they do not have to compete with adults for food.

Mantella tadpoles grow well when fed the usual assortment of fish foods, such as tropical fish flake, algae wafers, shrimp pellets, bloodworms and daphnia. Feed them daily as much as they will consume. In addition, powdered spirulina and chlorella algae, which are available at health food stores, can be offered several times a week. Use a siphon to remove uneaten food and waste the following day.

At a water temperature near 68 degrees, the first tadpoles metamorphose in about two months. Others continue to leave the water during the following four to six weeks. When front arms are noticed, the miniature mantellas with tails should be moved to a container with shallow water and some java moss. This prevents drowning. Once the tail is nearly absorbed, the mantella froglet can be moved to a small, simple setup with either paper towel or sphagnum moss substrate.

Freshly morphed mantellas are tiny, measuring less than a half-inch. Although only a fraction of the adults’ size, froglets share their tremendous appetite. They are capable of eating the smaller flightless fruit fly, Drosophila melanogaster, as well as 1- to 2-day-old crickets. Springtails are also useful, particularly for small froglets.

All species except M. laevigata are fairly drab in color as juveniles, but they develop their adult pattern as they mature through the following year.

With their threatened status in the wild and unsecured position in the pet trade, mantellas deserve focused interest from all people who care about amphibians. Captive reproduction does not occur regularly. With wild-caught mantellas dominating the supply at the moment, it only makes sense for more attention to be paid to breeding them in captivity. It will secure their future in the hobby and support their preservation in the wild.