To successfully breed the Australian water dragon (Physignathus lesueuerii), you need to start with healthy, well-nourished lizards that are at least 2 1/2 to 3 years of age or older, depending on the growth habits of the individuals kept. It appears to be important that they have a good winter brumation, as temps in parts of their natural habitat during the winter months (our summer) normally range from 40 degrees Fahrenheit at night to 60 degrees in the day, on average, for several months. Keeping them outside in the southern part of the United States is possible as long as they have a retreat from the freezing cold to burrow into. A large mound of dirt with a thick layer of hay overtop will provide them with a natural burrow that they can dig into and hide out for several months. It is necessary that the lizards clean out their digestive tracks a week or so before entering brumation, otherwise they will die from food rotting in their guts during this long period of inactivity.  I stop food altogether during this time. 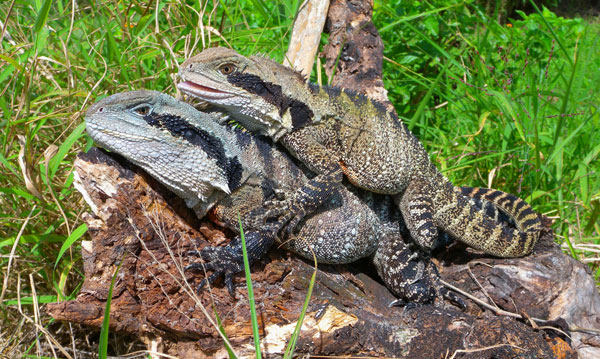 When the cold of winter has passed (where I live in Florida, this is after two months), the dragons will emerge from their burrows and initiate eating, drinking and reproduction. As long as the weather keeps warming up, feed them a variety of foods and let them have as much as they can eat. Calcium-dusted prey at every feeding will help to keep calcium levels up on the egg-developing females. They may lay multiple clutches over the course of the season, so they will need the stores. I’ve had them eat on 50-degree mornings like they knew it would reach 80 degrees during in the day, and of course, it did, otherwise I would not feed at all.

You may or may not witness copulation, but it usually lasts from 20 minutes to an hour. Around a month to a month and a half after breeding activity begins, females will start digging several test nest sites. I recommend providing a nest box measuring approximately 3 feet long, 2 feet wide and 2 feet tall, with about a foot deep of nesting material. I find that a dampened combination of organic potting soil, coco fiber and play sand is a magical mixture for nest boxes, as well as a good incubating medium. Eventually, females will lay their eggs in the box, at which time you may carefully excavate them. Healthy females typically lay anywhere from four to 13 eggs per clutch.

For incubation, put the mixture of dampened (not wet) potting soil, coco fiber and play sand in a deli/sandwich container with two tiny air holes near the top and carefully place the eggs inside so that two-thirds of each egg is sunk into the medium, then seal with container lid and wait.

Australian water dragons are one of many reptile species that are known to have TSD (temperature sex determination), which means that in this particular species, the higher temperature ranges of safe incubation limits produce mainly females, whereas midrange produces mainly males and the lower limits once again mostly females. I’m not one to gamble on extremes, or lives for that matter, so I stay in the safe limits of 82 to 84 degrees and produce a mixed sex ratio. At these temperatures, incubation duration is between 65 and 90 days. Cooler incubation temperatures will yield a longer incubation period, whereas higher limits will decrease the time to hatch.

I raise each hatchling clutch in 40-gallon sized breeder tubs for three months and keep a careful eye on the hatchlings to make sure they are getting along. I feed up to three times a day – mostly small crickets that are two-thirds the size of their heads, as well as mini mealworms and small roaches. Everything fed to the babies is dusted with calcium D3. They are also provided with quality UVB bulbs and basking temps. The conditions are same as those provided to the adults mentioned in the February 2013 article of REPTILES.

Breeding the Australian water dragon (in captivity is a rewarding goal for the serious keeper who has a sexed pair or trio. These lizards are not available as imports any longer, and having them available for future pets can ensure they remain obtainable to other keepers interested in these amazing animals.

Scott Corning a herpetoculturist with more than 23 years experience breeding reptiles, especially in the Family Agamidae and Iguanidae. He has managed and operated two reptile stores, bred countless reptile species and specialized in his own business in 1996. His articles and pictures appear in many publications throughout the world. Visit him at his website, sailfindragon.com.