Conservation And Breeding Of White-Throated Monitors

White-throated monitors (Varanus albigularis) are moderate- to large-sized lizards belonging to the genus Varanus within the family Varanidae. Varanus is derived from the Arabic waran, which literally means monitor lizard and probably refers specifically to the Nile monitors seen inhabiting certain areas of Egypt. 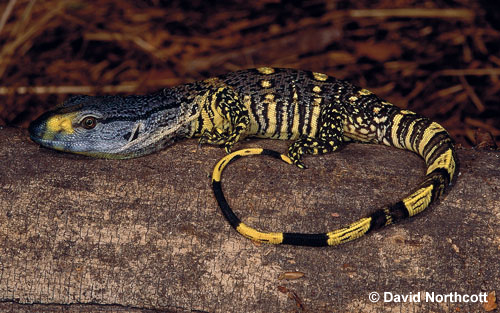 When this juvenile Varanus albigularis reaches a snout-to-vent length of about 1½ feet, it likely will be sexually mature.

The name “monitor” is believed to originate from an ancient superstitious belief that these lizards would give a warning when crocodiles were nearby, perhaps because Nile monitors are often seen about crocodile nests foraging for crocodile eggs. Additionally, many monitors, including Nile monitors, can assume a bipedal posture on occasion, allowing the animals to “monitor” their immediate environment.

However, to the best of my knowledge, this has never been observed with white-throated monitors. These animals are often called leguaan in Afrikaans (oddly enough, a name believed to be derived from “iguana”), and they may be the closest relatives of snakes among living lizards.

Most white-throated monitors for the pet trade, V. a. microstictus, appear to originate from Kenya and Tanzania. Additionally, though V. a. albigularis is protected in South Africa, export of captive-born individuals to the United States is allowed. Zimbabwe also allows some export of captive-bred V. a. albigularis, but in either case this trade does not appear to be well-regulated because no one has determined exactly how these countries account for what is captive-born and captive-bred for the purposes of allowing export.

Presently, all of the 58 or more species of monitors are classified by the Convention on International Trade in Endangered Species of Wild Fauna and Flora (CITES) as at least Appendix II, which indicates that they are considered potentially threatened and could become vulnerable if trade in these lizards is not regulated. Some monitor species have been or still are classified as Appendix I (endangered).

The ruthless exploitation of many monitor species is very likely causing their populations to decline, and because the population dynamics for monitor species are largely unknown, it is impossible to say just how many individuals can be safely harvested from wild populations without seriously affecting their long-term sustainability.

Monitors are periodically harvested from the wild for various reasons, which can include for the leather and pet trade, and also as food by native human populations. Because of their large size, many monitor lizard species, including African species such as savannah monitors, Nile monitors and white-throated monitors, figure prominently in the reptile leather trade. In addition, parts of their bodies are often sold as grotesque so-called exotic souvenirs, such as key rings made from their feet. Monitor lizards are popular in the pet trade for many reasons, including their large size, their exquisite color patterns, their intelligence, their reputation of being presumably easy to maintain and their impressive appearance.

Harvesting wild-caught monitor lizards for the pet trade is generally a much smaller enterprise than for the leather trade, and such wild-caught specimens generally end up being sold in Europe and North America. For example, between 1975 and 1986 about 13,000 savannah monitors were harvested from the wild for the pet trade. Between 1990 and 1998 the take was 233,959. But 1,370,000 entered the leather trade between 1975 and 1986. As a result, it has been suggested that heavy exploitation of both Asian and African monitor species for the fashion industry (leather used to produce bags and other goods) may bring about local extinctions if it is not carefully overseen and controlled. However, no definite case for this indictment has yet been adequately documented.

Based upon the analysis of circulating hormones, both sexes of white-throats appear to be sexually mature upon reaching a snout-to-vent length of about 1 1/2 feet. Among Namibian populations sexual maturity was reported to be achieved at about age 4 or 5 years.

Oddly, both sexes have an annual cycle for circulating testosterone (about twice as high in males), and the levels naturally peak during the mating season. Peak estrogen levels are also present in females during this time. After mating ceases, female testosterone levels fall to baseline levels, but the levels for males do not reach baseline until about two months after mating. During August and September in southwestern Africa, these monitors engage in mating, which places this behavior about three months before the onset of the wet season. In Namibia, mating occurs about a month earlier for the eastern populations than those in the west, and this coincides with the coincident earlier onset of rain in the east.

Male and female white-throats are normally solitary and do not interact except during the mating period. Males tend to mate with more than one female and can travel up to 2 1/2 miles in search of receptive females.

When receptive females are located, males mate with them over periods of one to two days. Interestingly, males typically find females up in trees, which may be evidence that females release pheromone attractants. Males will also only engage in aggressive interactions with one another only in the presence of females.

Females lay eggs after approximately 35 days after mating, which normally places this event about two months before the beginning of the rainy season. They can deposit large clutches (as many as 50 eggs), but clutch size depends on female size: the larger the female, the greater the clutch size. Apparently eggs hatch by about the middle of the rainy season, and sex ratios are 1-1 male to female.

The body mass for individual white-throated monitors is at its highest after the rainy season, which is when maximum feeding occurs. However, once these lizards' prey populations decline, they show a 4 to 5 percent decline in mass per month. When the dry season ends, females show a drop of about 50 percent of their peak rainy-season mass, and males show a drop of 60 percent. The female’s weight loss includes the decrease due to production of egg clutches, which can equal 25 to 40 percent of her body weight.

Fortunately, both sexes recover their lost body mass within two months of the onset of the rainy season, and skeletal growth for both sexes only occurs after they recover normal fat levels. Like many other monitor species, white-throats store a great deal of body fat in their tails and abdomens. Individuals that have lost a large portion of their tails exhibit poorer condition than those with intact tails.