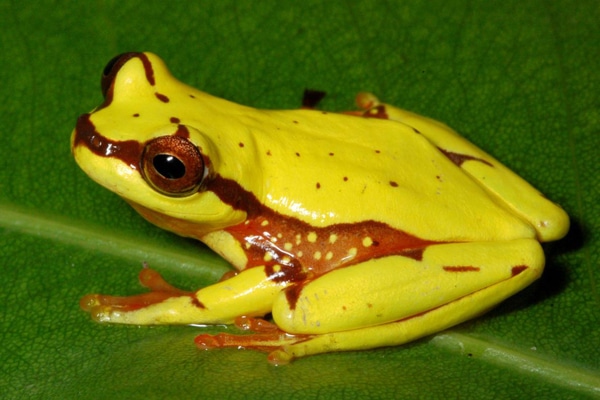 Dendropsophus mapinguari was discovered in 2009 but has just been described.

A new species of clown treefrog that is yellow and brown in coloration and sort of looks like taffy was discovered in the state of Amazonas in Brazil’s Floresta Nacional de Pau-Rosa, according to National Geographic.

The tiny clown treefrog is named Dendropsophus mapinguari, after a rainforest beast that exists only in folklore of the Amazon. It is apparently a tall and furry beast with huge claws and an additional mouth in its belly. The frog though is nothing of the sort. It is bright yellow, almost candy like with orange feet and and a few brown spots on its skin. It is just 22mm in length.

The frog was first discovered in 2009 when the herpetologist Pedro Peloso, with funding from the Brazilian government, was searching out an area of the Amazon that was set aside for conservation.

Peloso found the frog in a low hanging tree over a stream and had to bend the limbs of the tree to capture it. He thought it was new to science at the time, and set out on a quest to examine species in museums around the world. He also spoke with herpetologists about his find.

He was able to finally sequence the DNA of the amphibian and confirmed in a study published April 30 in the journal South American Journal of Herpetology that the little frog was indeed new to science.