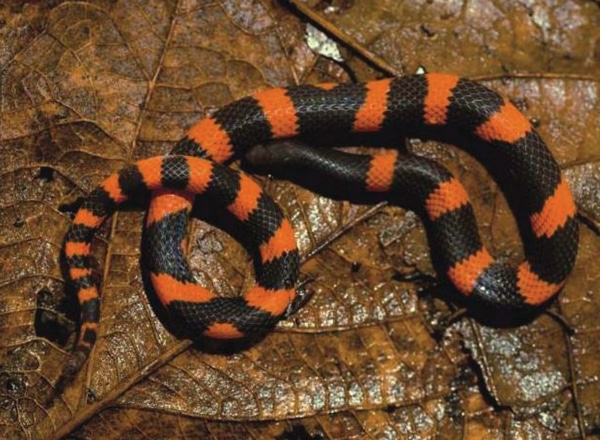 Researchers in Mexico have discovered a new species of earth snake that is striking in coloration and is similar to  Geophis duellmani and G. turbidus. The snake, Geophis lorancai, is orange and black in coloration. It features a black head and orange rings all the way through to its tail.

The snake is named after Mexican Biologist Miguel Ángel de la Torre Loranca, who acquired most of the specimens for the study from the Sierra de Zongolica mountains of Mexico. The habitat in which the reptile resides is described as cloud forests and pine oaks. Loranca found all of the specimens between October 1996 and April 2013 in cloud forest habitats.

The snake is a burrower and because of this, the species has not been studied very well.

"Most of these snakes have notably small geographic ranges and sometimes are only found in one type of vegetation. This makes them particularly vulnerable to the destruction of their habitat. It is important to know them before it gets too late," the scientists told Phys.Org. "These snakes are remarkably similar to each other and it has been only through molecular analyses and rigorous specimen examination that we have come close to understand how diverse they are," explain the authors.

The complete paper can be found on the Zookeys Journal website.