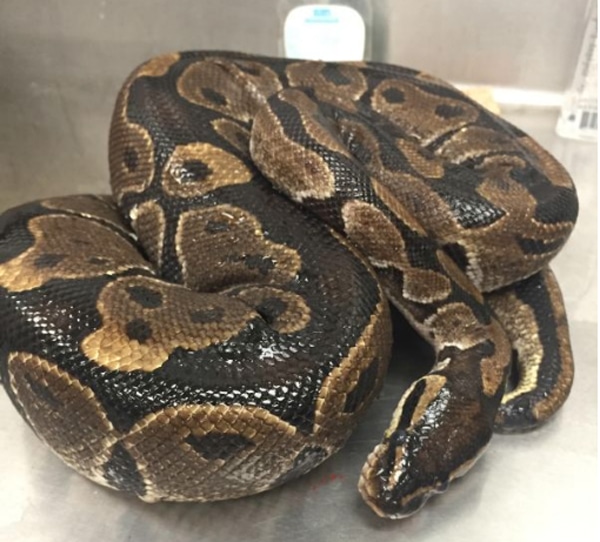 The snake was euthanized due to its poor condition.

A ball python was captured at a coffee farm in a state that has no native snakes and has laws that make it illegal to keep snakes.

The 3- to 4-foot long snake was captured at a Kaanapali coffee farm on the island of Maui, Hawaii July 1 by a Hawaii Department of Agriculture plant quarantine inspector who was called after the snake was discovered, Maui Now reports. The snake was later euthanized due to its poor condition. The ball python was euthanized due to its condition.

There are no native snakes on Hawaiian soil, though sea snakes are known to live in the ocean that surrounds the island chain. The Brahminy blind snake has also become established, with some reports saying it was introduced in the 1980s, probably hiding among imported potting soil.

The Hawaii Department of Agriculture has fairly strict quarantine procedures in place in an effort to keep reptiles out of the state. Snakes do find their way to the islands though, mostly as smuggled pets, though wild snakes, such as a king cobra and a brown tree snake have been captured on military cargo planes that land in the state.

In 2011, a nine-foot boa constrictor (Boa constrictor) was captured by pig hunters in O’ahu’s Halawa Valley, and in 2013, a five-foot boa constrictor was run over on the Pali Highway, which replaced Nu’uanu Pali Drive as the main street going into Waimanalo and Kailua. In September 2015, a woman in Pearl City, also on O’ahu, called the police to report a snake in her garage. That snake turned out to be a ball python (Python regius).