Bonus content from the January 2011 REPTILES magazine article "What Is It?"

Seasonal changes in temperature and day length will usually cause axolotls (Ambystoma mexicanum) to breed in late winter and early spring. Breeding can often be induced at other times of the year by making a partial water change using distinctly cold water or by adding some ice to the aquarium. 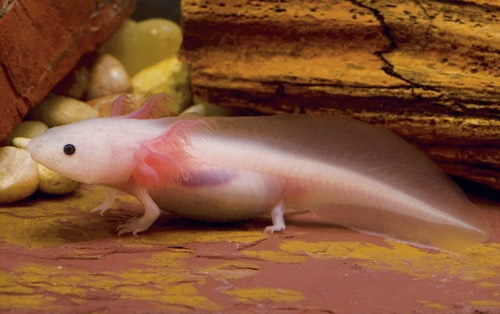 Egg-laying takes place between 12 and 72 hours later. Up to 1,500 axolotl eggs may be deposited individually on the aquarium decor. Plants will be used if available. Remove the eggs or the adults as soon as egg-laying has finished, because axolotls are not averse to eating their own eggs. Eggs hatch sooner and larvae grow at a higher rate when kept at the upper end of the safe temperature range. At 72 degrees Fahrenheit, the eggs will hatch in about 15 days. 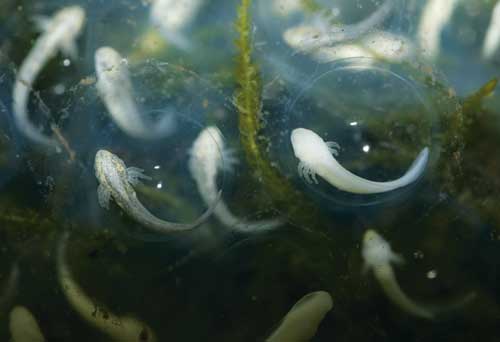 Good water quality is essential for axolotl growth and survival.

Although you could keep as many as 200 axolotl hatchlings in a 20-gallon tank, 100 would be a safer number, especially when you are feeding twice a day. However, within a couple of days the hatchling axolotls would need to be separated into smaller communities.

Newly hatched axolotls will not feed immediately. During this time, they absorb the egg yolk remaining in their bellies – visible as a cream colored mass. Within 48 hours or so the axolotls will require tiny, live-food items in large quantities. Unlike frogs, salamanders develop their front legs first, and until these come in, they will only respond to food that moves. Foods such as newly hatched brine shrimp, live Daphnia, microworms and chopped blackworms (these wriggle for a long time after chopping) are most appropriate.

As soon as the youngster axolotls develop their front legs, they become mobile and will actively hunt for food. The axolotls will now begin to accept non-living foods, such as chopped frozen bloodworms. From this point onwards it is important to feed the youngsters at least once, but preferably twice, each day, because at these early stages, axolotls are extremely cannibalistic. Well-fed youngster axolotls are also less likely to develop gas bubbles in their gut. If you encounter this problem, remove the effected youngster to its own container and fill with just enough water to cover it. Now offer food to the axolotl’s mouth using a tweezers/forceps. A day or two of this treatment should result in a purging of the bubble from the gut, and the axolotl can rejoin its siblings in the main raising tank. The lower the density of young axolotls per aquarium, the less likely you are to see lost limbs and damaged fins.

Keep a close eye on water quality, particularly during the first few weeks. Once the axolotls develop their hind legs they are, to all intents and purposes, miniature versions of their parents and can be cared for in the same manner. Their cannibalistic tendencies will gradually subside, as they grow larger.

Want to read the full story? Pick up the January 2011 issue of REPTILES, or subscribe to get 12 months of articles just like this.