Australia's critically endangered sunset frog (Spicospina flammocaerulea) might see a chance to become established in southwest Australia with the introduction of 31 frogs and 252 tadpoles into a peat swamp near Walpole, Australia, the West Australian is reporting. The frogs were released from protective care at the Perth Zoo in the hope that the captive bred specimens will create a new population outside their known habitat range. 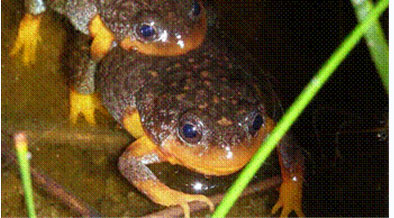 The sunset frog was first discovered in 1994.

Dr. Manda Page of Australia's Department of Environment and Conservation says in the report that the frogs are at risk of becoming extinct because of its restricted distribution and reliance on very specific habitat. She told the West Australian that the frog lives in poorly drained peat-based swamps and is vulnerable to changing environmental factors as well as habitat excavation by feral pigs.

The release site is on private property that was deemed suitable for the frogs. The scientist hopes that the frogs will establish themselves there, which is outside their natural range. If the frogs successfully breed in the release site, that site will provide insurance against any catastrophic event that may occur in their natural range, such as a brush fire that could destroy their peat swamp habitat, Dr. Page said. The owner has fenced the property and is going to work with the DEC's Walpole office to help protect the habitat and monitor the progress of the released frogs.

The sunset frog was first discovered in 1994. Its range is very small at just 333 acres which is very fragmented, making the species very susceptible to local catastrophes such as wildfires. It is dark purple to black to dark gray on it top with orange markings on the margins of the body and on the hands and feet, as well as the throat, chest and underside of the hands and feet.