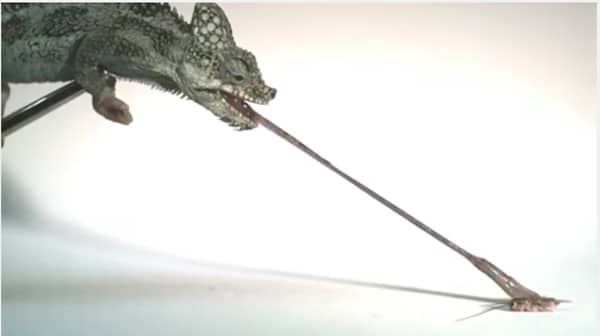 As Far As Speed Goes, Smaller Chameleons Have Faster And More Powerful Tongues

A small chameleon species has a tongue that can go from 0 to 60 mph in a hundredth of a second.

Chameleons are unique in the reptile world in that they have super long tongues that are used to capture their prey, but did you know that those tongues, especially amongst the smallest chameleon species are fast? As in supercar fast relative to their size?

Christopher Anderson, a biologist at Brown University was tasked to measure the speed in which the tongue of several chameleon species were measured. Anderson, which called the measurements "ballistic tongue projection," found that the small chameleon species, Rhampholeon spinosus (that could fit on the tip of your thumb) is capable of producing peak acceleration speeds of, in automotive terms, 0 to 60 miles per hour in a hundredth of a second, and needs just 20 milliseconds to capture a cricket. 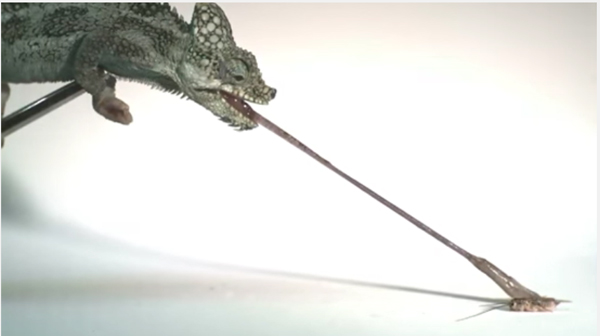 Rhampholeon spinosus is the fastest chameleon species studied in the tongue speed test.

Anderson’s work suggests that Rhampholeon spinosus is the fastest with the most power output per kilogram of muscle mass of any bird, reptile, or mammal. It is also the second most powerful of any vertebrate.

Anderson studied 20 different species of chameleon and found that the smaller species, including Rhampholeon spinosus, are the fastest, while the largest species in the study, Furcifer oustaleti, while slower, was still no slouch in the speed department. It had a peak acceleration less than 18 percent of Rhampholeon spinosus.

Anderson says the smaller chameleons have proportional to their size, larger tongue catapulting apparatus than the larger chameleons and comapres them to small sports cars with powerful engines. The reason why they are faster is due in part to their body size. They are smaller and must consume more energy per body weight to survive.