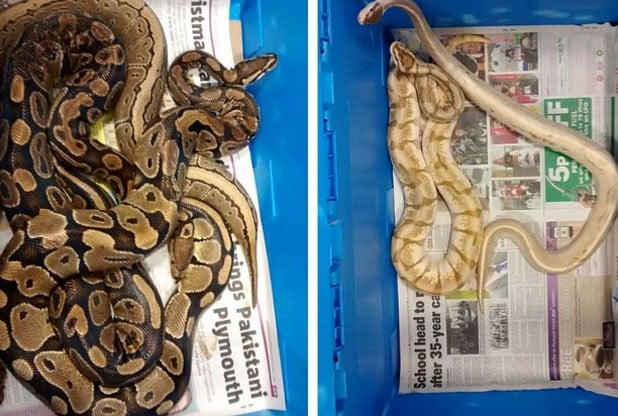 Only 1 of the snakes survived.

Someone dumped a box of 12 ball pythons (Python regius) in front of a veterinarian office in Plymouth, England over Christmas, and all except one of the snakes have died, according to a report in the Plymouth Herald. The RSPCA is now looking for the person(s) who dumped the reptiles. 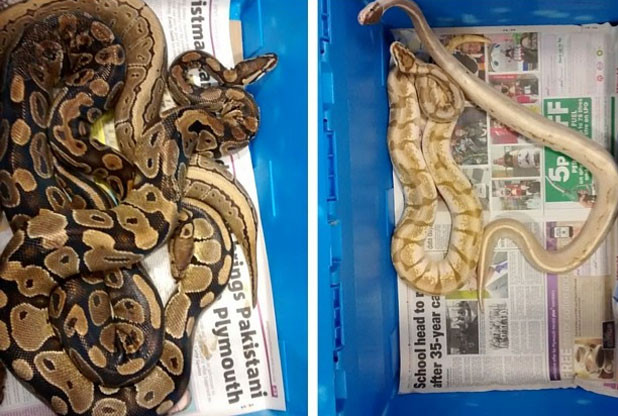 These ball pythons were dumped in front of a veterinarian's office in England.

The snakes were left outside the vets office and were in poor health, all with respiratory problems. They were not cared for properly, according to Plymouth Animal collection officer Peter Ferris who placed the animals with foster carers in the city. Ferris, an exotic animal specialist noted at the time that the condition of the pythons was not good.

“It is so sad to see any pets dumped but particularly exotic pets which really need specialist care," Ferris said. “We would urge people who can’t cope with their exotic pets to please contact the RSPCA or their local vets for help and support. To abandon an animal can compromise his or her welfare, especially for snakes, who cannot produce their own body heat. We urge anyone with any information about how these snakes came to be abandoned in this callous way to call us on 0300 123 8018.”

According to the RSPCA, England has experienced a surge in exotic animal neglect during the last several years, with large numbers of exotic animals abandoned or given up at shelters. The head of wildlife at the RSPCA, Adam Grogan told the Plymouth Herald that the expertise to care for these animals is sometimes too challenging for those who purchase the animals, and oftentimes are sold to people without giving the people information on how to care for them properly.  If you don't know how to care for an animal, don't acquire one. Here is a care sheet for the ball python.