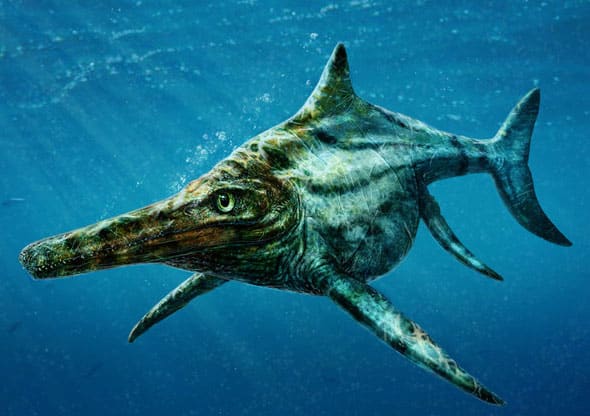 Researchers with the University of Edinburgh in Scotland have described a dolphin-like marine reptile that prowled the Scottish seas during the Jurassic period more than 170 million years ago. Found in Scotland’s Isle of Skye, the ichthyosaur was at the top of the food chain and looks like a dinosaur but technically isn’t a dinosaur, according to Stephe Brusatte, who is the lead author of a paper which describes the creature.

Its scientific name is Dearcmhara shawcrossi, and it was around 14 to 15 feet in length. Its dolphin-like body was built to patrol the waters off Scotland’s coast, looking for fish to eat. The marine reptile’s fossils were discovered in Bearreraig Bay in 1959 by amateur fossil hunter Brian Shawcross, who turned the bones over to the University after his discovery.

Contributors to the research team, called PalAlba, includes the University of Edinburgh, National Museums Scotland, the University of Glasgow’s Hunterian Museum, Scottish National Heritage and Staffin Museum, Isle of Skye. Bones of Dearcmhara shawcrossi will be showcased January 18 at Our Dynamic Earth in Edinburgh.

The full scientific paper can be found on the Scottish Journal of Geology website.