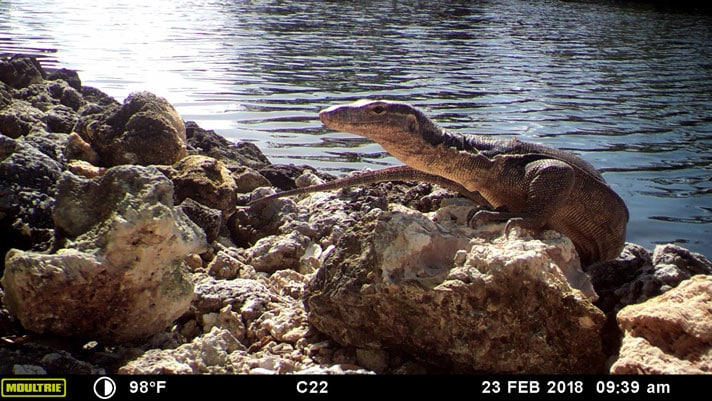 After A Year Of Trying, An Asian Water Monitor Finally Caught In Florida

The Asian water monitor was first reported loose in October 2017.

A large Asian water monitor (Varanus salvator) that had eluded capture in Florida for more than a year has finally been caught. The 20-pound reptile was captured in humane traps that were outfitted with motion sensors in the Key Largo area of the Sunshine state.

“This large invasive Asian water monitor, measuring 5 feet 2 inches long and weighing 20 pounds, was recently captured and removed from the wild thanks to some incredible teamwork!” the Florida Fish and Wildlife Conservation Commission wrote on its Facebook page May 16.

“Staff, volunteers and partners have been setting traps and searching high and low to remove this nonnative reptile for over a year.”

The reptile was first officially reported on the loose in Key Largo in October 2017. Others claimed to have spotted the reptile the previous summer, according to a Facebook post on The Florida Keys Free Press page. Humane traps were set in the area and were baited with eggs and turkey necks, as well as seven game cameras in an effort to locate the reptile but the reptile eluded capture until now. FWC volunteer Bob Darling helped an FWC biologist set the traps and he also baited the traps and monitored them in an effort to locate the reptile. Darling is no stranger to invasive reptiles, as he has volunteered hundreds of hours of his time removing the nonnative species from South Florida and was named the Division of Habitat and Species Conservation’s Volunteer of the Year.

Water monitors are native to Eastern India and Sri Lanka, eastward through southeast Asia, Malaysia, Indonesia and the Philippines. They can grow to more than 8 feet in length, though most average around 5 feet in length. They are one of the few large lizards that folks keep as pets.