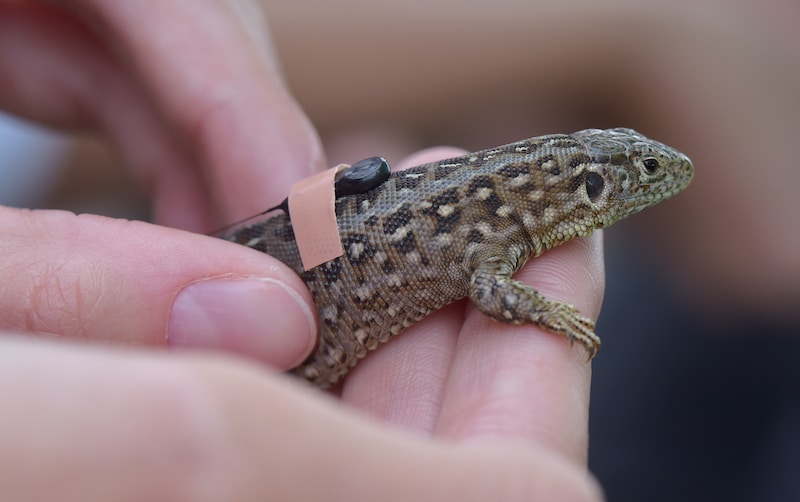 Some of the sand lizards were outfitted with radio transmitters to track their movements.

Conservation organization Marwell Wildlife has released 80 juvenile sand lizards (Lacerta agilis) into the Eelmoor Marsh Site of Special Scientific Interest, near Farnborough. This release is the last of a three-year release and research project to reintroduce one of the United Kingdom’s rarest reptiles back into the wild. 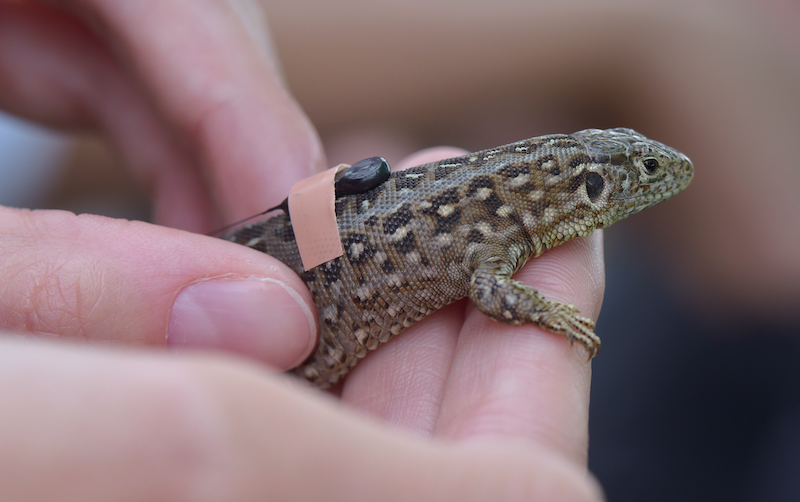 This sand lizard is outfitted with a radio transmitter.

Rachel Gardner, a Ph.D student from Marwell Wildlife and University of Southampton and lead researcher on the project, was able to evaluate survivorship of hatchlings and yearlings, as well as the change in activity across each age group. The lizards were outfitted with radio tags and the data that was collected was very interesting.

“We have seen some unexpected behaviours, for example, some individuals travelled over a hundred metres away from the release site within just a couple of weeks,” Gardner said in a press release. “Considering the size of the animals [a few centimetres long] and the complexity of the heathland environment, this is quite a distance in such a short space of time.”

“It’s been a privilege to work on this project and observe the sand lizards in such detail,” Gardner said. “Not only is Marwell Wildlife contributing to the wider reintroduction programme by breeding them in captivity for release into their natural environment, but we hope the research will help inform and make recommendations for the reintroduction protocol in the future, and therefore help optimise its conservation success.”

Marwell Wildlife maintains a captive breeding program for the sand lizard, and since its implementation, more than 240 sand lizards have been reintroduced into Eelmoor Marsh. It is hoped that a self-sustaining population can flourish in the marsh. Marwell Wildlife has also worked with Amphibian and Reptile Conservation Trust and Natural England to successfully release more than 2,000 sand lizards back into the wild.

Thought by some to have gone extinct 65 plus years ago, the sand lizard has been the beneficiary of captive breeding programs that have for the last several years released them into their native habitats in an effort to help them multiply and thrive. The species, listed as threatened in the UK and protected under UK law, has declined due in part to habitat loss, agricultural expansion and building developments.