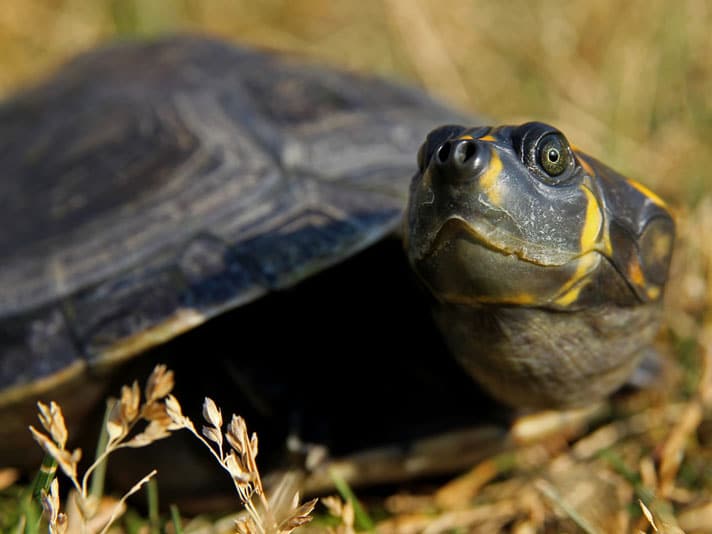 The genus Podocnemis features six species of large river turtles found throughout South America. These impressive turtles have been elusive for turtle keepers in the United States due to legal restrictions. All species are protected as Appendix II species by CITES (Convention on International Trade in Endangered Flora and Fauna) and the giant river turtle, P. expansa and the yellow-spotted river turtle, P. unifilis are also on the U.S. Endangered Species List, which prevents their interstate travel as a commercial venture without captive born wildlife permits.

The yellow-spotted river turtle, P. unifilis, is found in the Caribbean drainages of Guyana, French Guiana, Venezuela, and Colombia, the upper tributaries of the Amazon River in Colombia, Ecuador, Peru, northern Bolivia, Southern Venezuela, and Brazil. It is also established in parts of Florida as a result of escaped or released pets.

For an “endangered species," P. unifilis has a vast range and a relatively healthy population in the river systems in which it occurs, even though the eggs of Amazon river turtles have been collected by indigenous people as a food source for hundreds, or even thousands, of years. The meat and eggs of these turtles still appear in the markets today.

P. unifilis was a very important turtle in the pet trade in the United States in the 1960s.  Red-eared sliders were the baby turtles available in the summer and P. unifilis were available during the winter months.  Baby red-ears typically sold for 59 cents at the local dime stores and P. unifilis and the Colombian slider, Trachemys callirostris sold for 89 cents.  Protection under the Endangered Species Act was established in 1970 and the turtle was regulated out of the hobby. Interestingly, the Colombian slider was “protected” by the Endangered Species Act at the same time, preventing both species from being sold within the United States. There is no doubt in my mind that this regulation was done to protect the turtle farmers of the southeastern United States who were losing sales (at least half of the year) to foreign turtle farmers in South America.

P. unifilis, P. erythrocephala and P. vogli are being kept in captivity but numbers of adults is small and captive breedings are rare. The few breeders working with large river turtles report that they are hardy, yet sadly only a handful of Podocnemis are being kept and bred in the United States these days. Captive-hatched specimens of P. unifilis, P. erythrocephala, and P. vogli are available at some of the larger reptile expos and shows each year (mostly in Florida and southern California) and from some of the dealers on the Internet who specialize in rare turtle species.  So far, P. expansa has not been bred in the United States.

These turtles must certainly reach 20 to 25 years old in captivity when cared for properly, fed properly, and offered large enclosures with plenty of clean water. A few specimens of P. unifilis in private collections in California and Florida are approaching 20 years old and show no signs of old age.

Hatchling and young Podocnemis enjoy a variety of live invertebrates such as black worms, redworms, and even crickets. Adult Podocnemis eat mostly fruit and aquatic vegetation. In captivity, many will accept a more omnivorous diet, including a mix of commercial pelleted food. Care should be taken that any commercial diets they are fed are low in fat and protein. The basis of their captive diet can consist of a low-fat, low-protein commercial pelleted food (with a lot of Spirulina algae as a component) mixed with water hyacinth, water lettuce, watercress, and duckweed. In addition, romaine lettuce, kale, carrot tops, and fruits such as banana, mango, figs, and melon can be added.

As with all aquatic species and especially those that reach such large adult sizes as yellow-spotted river turtles, these turtles are best kept as specimens for breeding or enjoying in a large pond situation.  They are heavy and when held will scratch and claw to get away.

P. unifilis, the yellow-spotted river turtle, can be a prolific breeder in captivity. In fact, both P. unifilis and P. expansa have been produced by the tens of thousands in farms in South America and millions of farmed yearlings have been released back into the Amazon River and its tributaries over the last 20 years.

Females lay from 15 to 40 eggs, depending on the size of the female. The eggs are incubated in perlite or a mixture of ½ damp play sand and ½ peat moss with a layer of damp sphagnum moss over the top. This acidic moss helps to erode the egg shell and makes hatching easier. I do this for all South American species. The eggs of this species may experience diapauses and may need to be cooled for one month (55° F) to break this “resting stage.”  The pattern is typically – Incubate for one month at 84° F, cool for one month at 55° F, and then return the eggs to the incubator at 84° F. Keep humidity at 65 to 75% during the entire process. There are reports that eggs of this species will hatch without the cooling period but I cool all eggs from South American species.

Hatchling Podocnemis can be set up in a 20-gallon long aquarium with a filter and 8-10” of warm, clean water with plenty of driftwood and live plants added as décor and as a basking spot.  It is vitally important to provide water that is low in pH and with plenty of tannins (by adding oak leaves and oak logs to the water) to keep the shells and eyes healthy. The young are much more carnivorous than adults and they feed on live food such as redworms, blackworms, mosquito larvae, and guppies. Like Snake-necked turtles of the genus Chelodina, they can be delicate and reluctant to feed as hatchlings.  The live worms and mosquito larvae usually fix this predicament quickly as the turtles are attracted to the wiggling movement and once feeding, are hardy and grow quickly. Commercial turtle foods should be added to their diet as soon as they are feeding well. The live aquatic plants are important as they add variety to their diet and will become the foundation of their diet as they reach adulthood.

When they are kept outside, these turtles thrive in large backyard ponds, especially in warm climates. The few Podocnemis keepers in the United States usually keep their turtles in fenced ponds or secure above-ground pools to prevent escape and to protect their turtles from predators and theft.  Recovered swimming pools have proven to be excellent enclosures for these large turtles. Large enclosures, low pH, and warm, clean water are all a must for these turtles. They love to bask, so plenty of sturdy and accessible basking spots should be provided. As they are secretive and shy, they quickly plop into the water at the first sign of movement around them. They will often swim a short distance away and then quickly surface in case food is forthcoming. The addition of lots of plants, both floating and submerged, adds to the health and beauty of river turtle enclosures.

A few keepers of Podocnemis choose to keep their animals inside to avoid any potential disasters from cold weather, predators, or theft. Podocnemis are very sensitive to cold weather and will die quickly if chilled. Many keepers strive to never allow their river turtles to drop below an air temperature of 65º to 70º F (18º to 21º C). This is obviously much easier to do in a controlled indoor situation, however, very large aquariums are required.  Aquariums and plastic tubs work well for smaller turtles and in most cases, larger tubs in the 4’ wide x 8’ long x 2’ deep range will be sufficient to hold a pair of adult specimens of the smaller species.

In captivity, the Amazon River turtles require large, freshwater ponds with clean water and devoted care.  They will reward keepers with interesting behaviors and perhaps even a few bright-eyed hatchlings that are amazing little jewels and some of the rarest turtles in herpetoculture.

Pritchard, P. and P. Trebbau. 1984.  The Turtles of Venezuela.  Society for the Study of Amphibians and Reptiles.