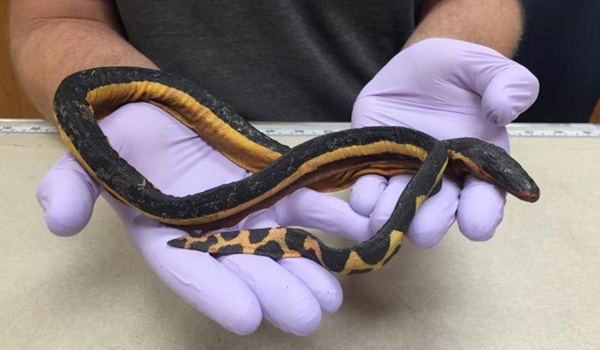 This is the second time in two months a yellow-bellied sea snake washed ashore in Southern California.

For the second time in as many months, a yellow-bellied sea snake (Pelamis platurus)has washed ashore on a Southern California beach, this time in Huntington Beach. The 27-inch-long dead male snake was found during a coastal cleanup campaign sponsored by the Surfrider Foundation, an advocacy group that fights for access to beaches around the world. 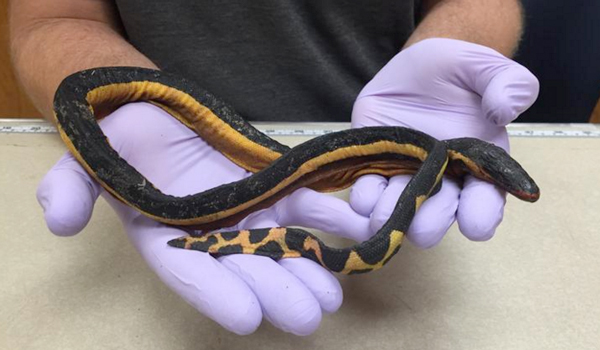 This yellow-bellied sea snake washed up in Huntington Beach, Calif.

The first snake washed up alive at Silver Strand Beach in Ventura County but died.

“It is incredible and fascinating to have two of these aquatic, highly venomous snakes suddenly show up around here,” Greg Pauly, herpetological curator at the Natural History Museum of Los Angeles County told the Los Angeles Times. “But this is not an invasion, and no one has ever died from the bite of this animal.”
“Their fangs are tiny and they can barely open their mouths wide enough to bite a person,” he said. “So, unless you pick one up, the biggest safety concern with going to the beach is with driving there and then driving home.”

The snake is normally found in Baja California waters, and off the coasts of Africa, Asia, Australia, and Central America. It most likely followed the warm water currents that had been off the coast of California for the better part of the last six months, spurred by the El Niño event that is occurring. The waters off Southern California have cooled considerably and are now in the low 60s, too cold to sustain the species.

The yellow-bellied sea snake is the only pelagic sea snake. If you are bitten by this venomous snake, you can experience damage to skeletal muscles, paralysis and renal damage.