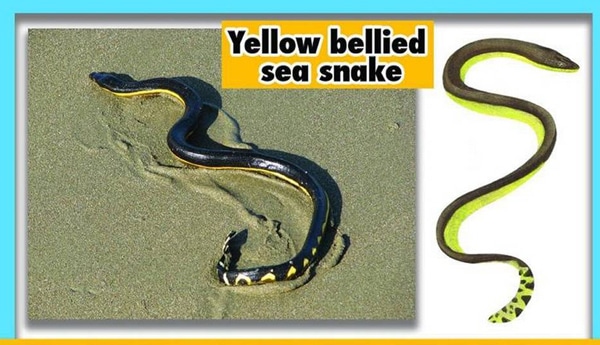 A yellow-bellied sea snake (Pelamis platurus) in Southern California? Yes. That is the species of sea snake that washed up on the shores at Silver Str

A yellow-bellied sea snake (Pelamis platurus) in Southern California? Yes. That is the species of sea snake that washed up on the shores at Silver Strand Beach in Ventura County. The approximately 2-foot long snake was discovered Friday by a surfer and died right after it was taken to a local U.S. Fish and Wildlife Service office, according to the Los Angeles Times. The snake is normally found in Baja California waters, and off the coasts of Africa, Asia, Australia, and Central America. It most likely followed the warm water currents that have been off the coast of California for the better part of the last six months, spurred by the El Niño event that is occurring.

The dead snake is now at the Natural History Museum in Los Angeles County, where its vitals were taken, and tissue samples were taken for DNA analysis.

Although the yellow-bellied sea snake is rare off the coast of California, it has been found during El Niño events. The last time a sighting of this species occurred off the California coast was during the El Niño of 1983.

The yellow-bellied sea snake is the only pelagic sea snake. If you are bitten by this venomous snake, you can experience damage to skeletal muscles, paralysis and renal damage.