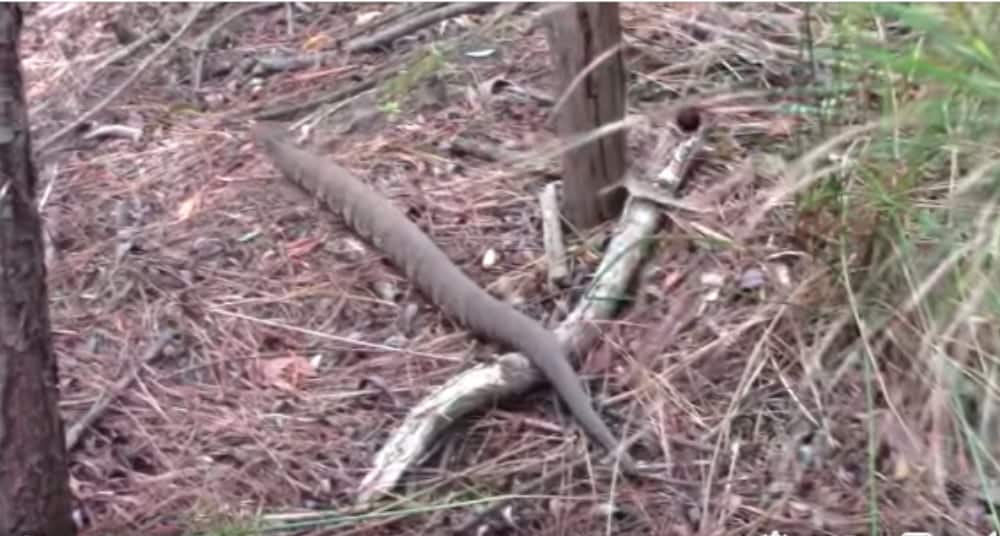 Herpetologist Frederick Boyce of the N.C. Aquarium at Pine Knoll Shores in North Carolina, had just recorded video footage of an Eastern kingsnake (Lampropeltis g. getula) eating a juvenile cottonmouth (Agkistrodon piscivorus) when a larger cottonmouth was fleeing from the area using a form of locomotion that resembles someone pulling straight on a garden hose, rather than the typical side to side locomotion snakes often employ. Boyce, who manages the Cottonmouth Acres Science page on Facebook posted the video of the cottonmouth in a seemingly flight mode, most probably to evade the Eastern kingsnake.

“This video captures a unique form of locomotion … which is to straighten out like a board and slide down a steep grade or embankment,” Boyce said in his post on Facebook.

Indeed, the cottonmouth was moving so fast, when it reached a downhill portion, it tumbled over itself, then righted itself and went on its way.

“I had just finished filming the eastern kingsnake in the previous three posts swallowing the juvenile cottonmouth, and was continuing on through the woods along the Great Ditch which passes through the heart of Cottonmouth Acres” Boyce said in his post on Facebook. “I had only gone a short distance when I heard a sudden rustling – slithering, actually – just to my left and was amazed to suddenly see this cottonmouth passing me in the opposite direction, away from the ditch, oblivious or totally unconcerned by my presence. It was obviously in a big hurry and moving as fast as I’ve ever seen one of these snakes travel on land (which is not very fast, by the way!).”

Boyce wrote that the cottonmouth was moving so fast because the kingsnake probably got the scent of the cottonmouth and may have been pursuing it. And not wanting to be the king snake’s next meal, it resorted to a form of locomotion called rectilinear locomotion, in which the snake’s ribs do not move, but rather, just the muscles and skin move to produce the forward motion. This method of movement is also slow, but is also almost noiseless and hard to detect.

Vets Save Cottonmouth. She Throws Up Two Garter Snakes And A Leopard Frog

At any rate the video is interesting in that the cottonmouth is implying this form of movement, and as the video shows, is in a hurry to either get away from where it had been or wants to get somewhere faster.