Who's Who In REPTILES: John Clare

John Clare brings a lifetime of amphibian observation and conservation.

John Clare became fascinated with all things amphibian at a very young age."In kindergarten, my teacher brought in frog spawn one day, and we watched it develop in a goldfish bowl and hatch into tadpoles. That started my lifelong fascination,” he says. 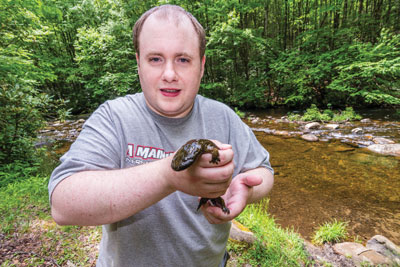 John Clare's interested in amphibians started when he was in kindergarten.

As a young man in Ireland, he did not have much opportunity to see frogs in the wild, but it is one of his favorite experiences. “Living in the United States, with its hundreds of native species of amphibians and reptiles, is a dream come true for me,” Clare says.

After earning a bachelor’s degree in natural science, Clare began work as a scientific educator. He has bred a variety of different species, including many salamanders, newts, and dart frogs, and has also photographed many in the wild and in captivity.

“The most challenging part is finding some of the more elusive species in the wild and photographing them,” Clare says. “I’ve spent many days and several return trips looking for some particularly elusive salamanders and frogs. There is a real thrill in finally seeing them in the wild. Every year I try to improve my photography of wild amphibians. When I learn something new, of course I have to find those elusive amphibians again and take better photographs!”

By documenting animals in their native habitats, Clare can bring what he has learned back to those keeping these species in captivity. His desire to help educate other keepers is what inspired him to found caudata.org, the longest running amphibian community on the Internet, in 2001, and also frogforum.net in 2008.

“Some of our material was cited in 2010 as part of the successful petition to protect the critically endangered Luristan newt (Neurergus kaiseri) in the Convention on International Trade in Endangered Species of Wild Fauna and Flora (CITES), Appendix I,” Clare says. “On a more personal note, I’ve actively lobbied for a tempered approach by legislators to the recent proposal to ban interstate transport of amphibians within the USA. If the powers-that-be aren’t careful, such legislation has the potential to virtually eliminate the captive keeping of amphibians by Americans. I for one would not be a scientist if it weren’t for my encounters with amphibians in captivity as a child.”  REPTILES

“There’s more to herpetology than snakes, lizards and other reptiles. Spare a thought for the frogs, salamanders and other amphibians. We regularly lose species to extinction because amphibians are so sensitive to pollution and changes in the environment, such as the rapid climate change such as we’re currently experiencing. These animals are not only fascinating, they have yielded (and continue to do so) drugs that can treat severe pain and even fight cancer. Please do what you can to help lessen the impact of human activity on these wonderful creatures. Even volunteering to help migrating frogs and salamanders cross busy roads in the springtime makes a difference.”