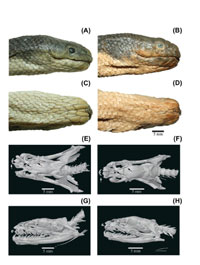 The beaked sea snake, long thought to be a single species, is actually two distinct species, according to a paper published in the journal Science Direct. The snakes, which inhabit estuaries and lagoons throughout the Indo Pacific, are known to be aggressive, with venom that is more potent than that of a cobra or rattlesnake. These snakes apparently account for more injuries and death than any other sea snake.

According to a report on the Discover magazine website, scientists analyzed the DNA from 11 beaked sea snakes and determined that the snakes in Asia are totally different than their counterparts in Australia, even though they look nearly identical. 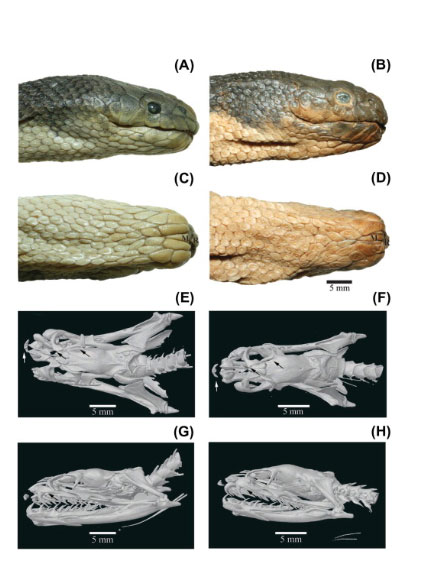 Photos and caption by University of Queensland.

Fig. 1. Diagnostic characters of the genus Enhydrina and a comparison of Osteological differences between Asian and Australian E. schistosa: (A and C): QM J41880 from Malaysia, (B and D) QM J61632 from Australia. Note the narrow elongated mental scale (M) and pronounced rostral scale (R) in both specimens and split 4th Supralabial in QM J61632 (B). Micro-CT image of the crania of E. schistosa from (E and G) Indonesia MZB Ophi 12126 and (F and H) Australia SAMA R65220. Note the convex flange over orbit, anteriorly shallow maxilla, smaller premaxilla and the absence of an anteromedial process in the prefrontal of MZB Ophi 12126.

The University of Queensland's Bryan Fry, a venom specialist and co-author of the paper, as a matter of habit, barcodes the DNA of the animals that he collects. With the beaked sea snake, he expected the Australian snake to have similar genes to that of the Asian specimen. When the first results were returned, he had initially thought there was something wrong with the science and ran the test again. When the test came back the same as the first, he then realized that he was dealing with not one species of snake, but two. The scientists, Kanishka D.B. Ukuwelaa, Anslem de Silva, Mumpunic, Bryan G. Fry, Michael S.Y. Lee, and Kate L. Sanders, then compared the genetic makeup of the 11 sea snakes with the DNA sequences to that of other sea snakes.

Though the snakes look nearly identical, there are a few subtle differences. The Asian beaked sea snake has fewer stripes on its body, a lower scale count, and a slightly different skull structure. Both species do have a notch between the two halves of the lower jaw which creates the "beak" and both feed primarily on pufferfish and spiny catfish. The beaked sea snake from Australia is currently named Enhydrina zweifeli, while the Asian snake is named E.schistosa. These names may change as both snakes are more closely aligned with the Hydrophis genus.