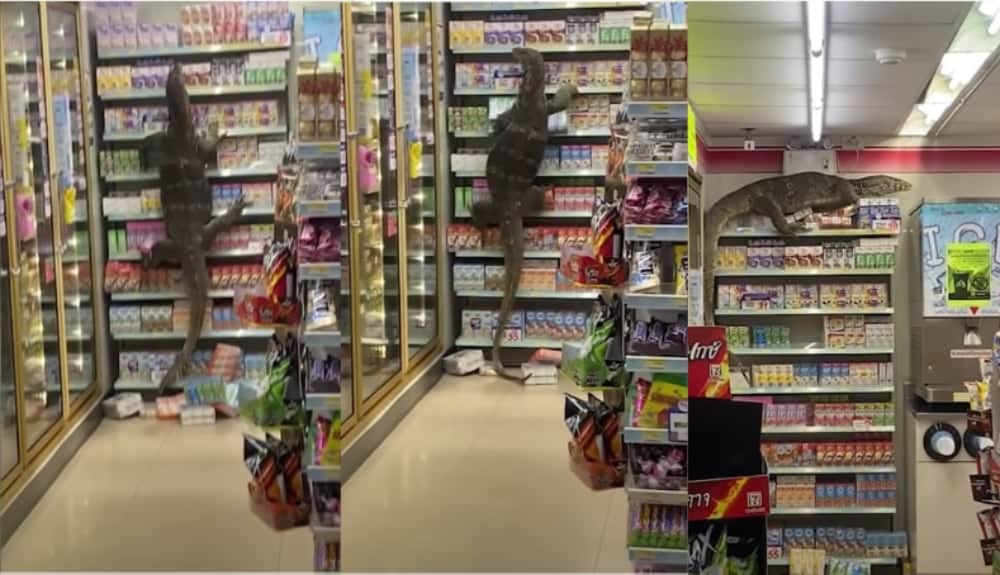 A video of an Asian water monitor (Varanus salvator) climbing up a shelf in a 7-11 in Bangkok, Thailand has gone viral. The video opens with the giant

Iguana Who Lost Front Legs Due To Being Hogtied Now Eating On His Own
Bearded Dragon Rescued By Hikers In Sonoma County, CA
World’s Highest Elevation Reptile, Liolaemus aff. tacnae, Discovered In Peru

A video of an Asian water monitor (Varanus salvator) climbing up a shelf in a 7-11 in Bangkok, Thailand has gone viral. The video opens with the giant lizard seemingly trying to open the cold case with his nose, (perhaps to grab a six pack of Singha) and when the door doesn’t open, decides to climb a shelf full of product. It is here that you see just how massive the monitor lizard is. All the while the bystanders are looking and commenting in obvious awe as the lizard easily scales the shelf, knocking plenty of products off the shelves as it reaches the top. The video then ends with the reptile resting atop the shelf of goods.

Asian water monitors are native to Eastern India and Sri Lanka, eastward through southeast Asia, Malaysia, Indonesia and the Philippines. They can grow to more than 8 feet in length, though most average around 5 feet in length. They are one of the few large lizards that folks keep as pets. The most famous water monitor is Kipling, who appeared in the Disney Channel show Jessie, which lasted four seasons, or 100 episodes.