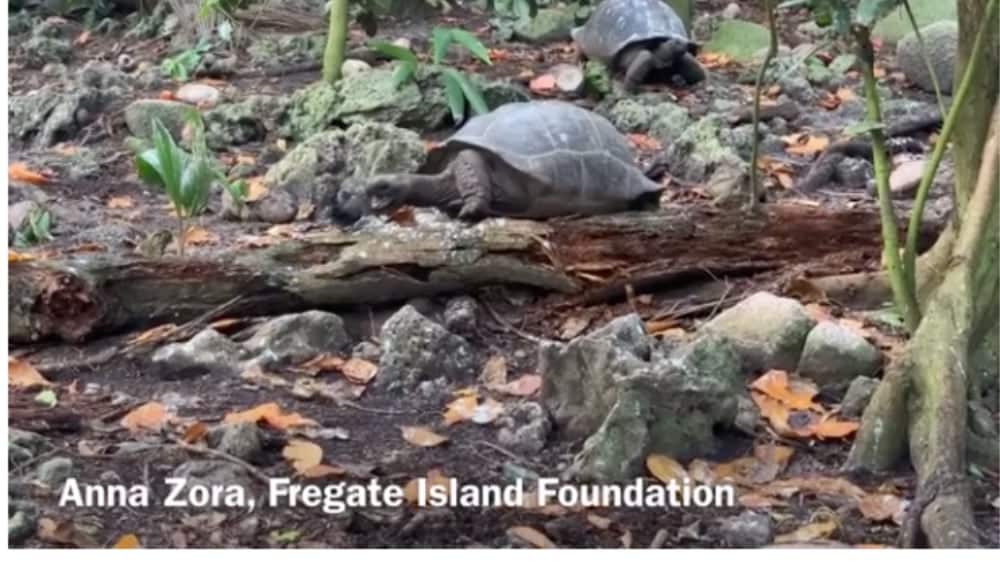 The behavior, first captured on video, may be a common interaction.

A female giant tortoise pursues a tern chick. Screengrab via Anna Zora. Giant tortoises have traditionally been known to be strictly herbivorou

Giant tortoises have traditionally been known to be strictly herbivorous, however new video footage of the Seychelles giant tortoise (Aldabrachelys gigantea) actually hunting and consuming a tern chick has seemingly changed that notion completely.

Researchers Justin Gerlach (director of biology studies at the University of Cambridge’s Peterhouse College) and Anna Zora (Frégate Island’s deputy conservation and sustainability manager) were in the woodlands of the Frégate Island in the Seychelles when they happened upon an adult female giant tortoise, albeit very slowly but methodically, pursue a tern chick that was apparently stranded on a log.

I couldn’t believe what I was seeing,”corresponding author Justin Gerlach (@jstgerlach), director of biology studies at the University of Cambridge’s Peterhouse College said in a news release. “It was horrifying and amazing at the same time.  It was looking directly at the tern and walking purposefully toward it. This was very, very strange, and totally different from normal tortoise behavior,” Gerlach said.

The giant tortoise makes several attempts to bite the tern chick to no avail, until the chick, which had moved to the end of onside of the log, makes a last stand to deter the tortoise, unsuccessfully. The tortoise succeeds in grabbing the tern chick by the head and clamps down, causing the tern to chick to fall off the log. While the video ends and doesn’t show the actual consuming of the bird, the tortoise does appear to move forward to consume it.

The researchers say the entire process from pursuit to the tortoise swallowing the chick whole took seven minutes. Gerlach also notes that he believes the tortoise is adept at hunting chicks that fall from nests in the trees.  “It looked to me like that individual had hunted successfully before; it seemed to know what it was doing,” Gerlach said.

Gerlach speculates that the conservation efforts that are occurring on the island may be driving the emergence of this predator prey interaction. The island has seen population increases of both the birds and the tortoises after decades of declines. It is possible that the conservation efforts are recreating conditions for natural behaviors that haven’t been observed for hundreds of years, Gerlach said.

ABOUT THE ALDABRA GIANT TORTOISE

An abstract of the observation can be read on the Cell Biology website.