The difference between “poisonous” and “venomous” in reptiles and amphibians.

Q. Can you explain the difference between “poisonous” and “venomous”? Which category do toxic amphibians fall into?
Mel Ambrose
Findlay, Ohio 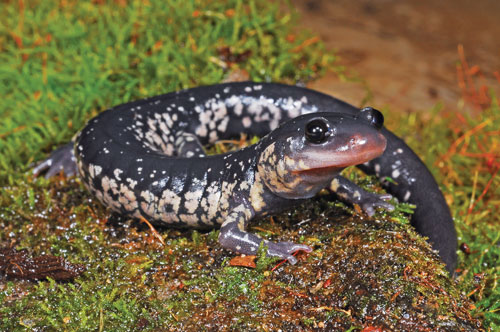 Some salamanders, such as Plethodon glutinosus, ooze a poisonous substance most accurately called an irritant. Healthy skin repels it, but even the dried residue from hands can burn your eyes hours later

A. Venom is a chemical injected into a victim via some sort of bodily apparatus specially evolved as part of the creature possessing the chemical. A viper’s fangs are classic examples of a deliberate venom-dispersing system. Bees’ and wasps’ stingers also fit in that category. Venomous Snakes>>

Poisons are toxic substances that exist inside or on the surface of a plant or animal, and they cause pain or death when they come in contact with another animal’s skin, mouth or digestive system. Not injected directly, they are absorbed through exposure. Usually that happens when a poisonous creature is bitten or swallowed, but sometimes handling also is enough. Amphibians’ skin secretions fall under the poisonous category, but calling them irritants is a better way to describe many because most skin secretions are not life-threatening.

These two terms are certainly distinct in their meanings, but don’t be surprised when you see them used interchangeably by the public. Most folks aren’t concerned with details such as where the “bad stuff” comes from on a noxious creature. Just knowing one possesses something potentially dangerous is enough to keep most people at a respectable distance.