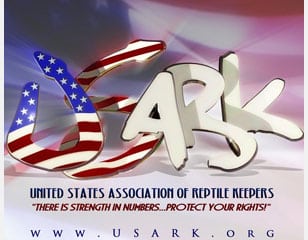 USARK responds to the U.S. Fish and Wildlife Service's (FWS) motion to dismiss legality of python listing under Lacey Act.

Last week, USARK responded forcefully to the U.S. Fish and Wildlife Service’s (FWS) motion to dismiss our complaint challenging the legality of FWS’ listing of the Burmese, Northern African, and Southern African pythons and yellow anaconda under the Lacey Act. Incredibly, the Government argued USARK and its members suffered no “injury” from its decision to ban importation and interstate commerce and transportation of these species.

In response, USARK filed declarations from President Phil Goss and other members and supporters detailing the economic, aesthetic, conservation, and personal injuries resulting from the Fish and Wildlife Service’s arbitrary decision. This evidence will be supplemented once the case moves beyond these preliminary skirmishes into the merits of USARK’s case.

The Government’s primary argument was that USARK had no standing to raise its four claims:

In its motion, FWS claimed that USARK’s complaint lacked both “prudential” and “constitutional” standing to bring our NEPA and Lacey Act challenge.

"Prudential standing” is a judge-made concept that seeks to ensure that a plaintiff in a legal action has some interest under the provision of law on which its case is based. Here, the Service claimed USARK's and its members’ interests were purely economic, and so it was precluded from raising claims under NEPA, which is an environmental statute. As to the Lacey Act, a law under which no plaintiff had ever before brought a case, the Government said it was only concerned with the impact of invasive species. According to FWS, as USARK was (in its narrow view) only concerned with economics and in selling snakes the government found to be injurious, we do not fall “within the zone of interests” the Lacey Act is meant to protect.

To the contrary, USARK noted, the organization and many of its members have conservation interests that the listing has harmed. Among other things, we presented evidence that the listing has burdened efforts to eradicate Burmese python in the Everglades, made research and conservation efforts more difficult, and caused undue stress (and possible premature death) to members of the listed species that could not receive timely medical care because the nearest herpetological veterinarian was across a state line. Goss also explained USARK’s actions and mission, explaining the support it provides to its members scientific, conservation, education, and economic activities.

According to USARK’s counsel, FWS was demanding way more detail than is needed at this stage in terms of allegations. However, our legal team has no doubt that the evidence presented fully refutes any claim that the organization lacks standing to raise its NEPA claims.

The Lacey Act claim is one of first impression. The government’s claim that the law is only about conservation and protecting the environment has, as USARK acknowledged, superficial appeal. We went on to note, however, that a close reading of this law shows that it is also about protecting economic activities, including agriculture and forestry, which are clearly not about protecting nature. Indeed, USARK noted that herpetoculture is closely related to those types of activities.

The Lacey Act also protects the pet trade. For example, it carves out certain types of foreign, captive-raised song birds. Also, by limiting its scope to only “wild” animals, it provides FWS no authority to regulate feral pigs and cats, both which wreak immense ecological damage.

The “constitutional standing” challenge is essentially FWS’ claim that USARK’s members have suffered no injury. The declarations presented clearly addressed that issue.

The final two claims were largely technical. The more important of these, a claim that USARK cannot bring its challenge to FWS’ ban on interstate commerce, is premised on the grounds that this ban was adopted in 1965 and so the statute of limitations has passed.

In response, USARK noted that it was challenging the January 2012 listing of these four snake species, which added an entire new section to FWS’ regulations. Given that, it is difficult to see how a rule adopted 24 years earlier can affect our case. USARK also pointed out that even if this old rule has any relevance, there are many exceptions to statute of limitations defenses in regulatory challenges like this.

The Government now has seven days to file a reply. View the Opposition to Dismiss at www.usark.org/wp-content/uploads/2014/03/Opposition__Order.pdf. View USARK declarations (Exhibits to Opposition) from supporters and President Phil Goss at www.usark.org/wp-content/uploads/2014/03/Exhibits_to_Opposition.pdf. As reported earlier, the initial deadline was 3/7/14 for USARK to file, but USARK counsel took advantage of a three day extension to file the final brief.

NARBC is back in Illinois this weekend (March 15-16). Once again top vendors from across the country will have incredible animals for the attendees to view and possibly bring home as new pets. Be sure to attend the USARK/PIJAC benefit auction, held Saturday night, to protect your freedom to keep reptiles and amphibians as pets. Brian Potter always keeps the event lively and entertaining. NARBC raised over $100,000 to support the pet community in 2013. Get all the show details at www.narbc.com/Tinley/tinley_park.html. Thanks for your continued support Bob. Brian and NARBC!

Volunteers: Needed during the show to work booth, collect auction items, and sell raffle tickets, and also for auction set-up. Please send an email to info@USARK.org or a private message on our Facebook page at www.facebook.com/UnitedStatesAssociationOfReptileKeepers if you would like to help with "NARBC Volunteer" as the subject.

Your legislators need to hear from you!

Other 2014 proposed legislation and information can be found at www.usark.org/2014-legislation/. By contacting your legislators, they know their constituents are against these overreaching bills. Voices from within each state matter most. USARK is contacting state legislators concerning these issues, educating them on issues and voicing opposition on behalf of our members and herpers in these states.

Chicago Herp Society's ReptileFest: April 12-13, 2014 from 10:00 AM-5:00 PM in Chicago, IL. The nation's largest educational reptile and amphibian show is back. CHS does a fantastic job educating the public at this event, which does not include live animal sales. Attendees can learn about appropriate pets, native species and conservation. There will be opportunities to hold animals, ask questions and enjoy these incredible creatures. More information at www.chicagoherp.org/fest.

David Northcott Health Battle: Dave is a remarkable person, award-winning photographer and cherished member of the herp community. He is battling a heart condition and has been informed he will need a transplant. You can support him at www.gofundme.com/6g1rak. We wish you well, Dave.

Cancer Battle: A fellow herper, Patrick Gerbert (TattooedGiants Reticulated Pythons), is battling stage 4 non-Hodgkin lymphoma. A fundraising page has been started at www.gofundme.com/Help-Patrick. Also, Travis Kubes and others are holding auctions on the Retic Nation Facebook page (www.facebook.com/groups/TheReticNation/) to benefit Patrick. We wish you the best in your fight, Patrick.

Indiana Reptile Breeders' Expo: March 16th in Clarksville, IN and March 23rd in Richmond, IN. More details at www.irbexpo.com.

Pacific NW Reptile and Exotic Animal Show:  March 29-30 in Hillsboro, OR. The PACNWRS is a public trade show exhibiting over 100 vendor booths offering exotic animals and their related merchandise. In addition to animals and products for sale, there are educational reptile and exotic mammal displays for the whole family. Get all the details at www.pacnwrs.com and www.facebook.com/pages/Pacific-Northwest-Reptile-and-Exotic-Animal-Show/.

OKC Elite Reptile Show: After a great first show, the second OKC Elite show hits Oklahoma City on May 3-4. More information will be posted at https://www.facebook.com/events/254930164657115/?fref=ts.

Biology of The Pitvipers Symposium: June 4-7 in Tulsa, OK. Learn more at www.biologyofthepitvipers.com and www.facebook.com/BiologyOfThePitvipersSymposium.