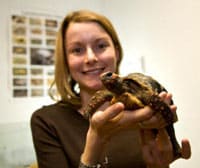 Chelonoidis carbonaria used in study on the spatial, visual and social cognition in tortoises

A scientist at the University of Lincoln in Riseholme, Lincoln in the UK has trained a red-footed tortoise (Chelonoidis carbonaria) to yawn, as part of her study on the "spatial, visual and social cognition in tortoises." In teaching her tortoise to yawn, Dr. Anna Wilkinson also won an IG Nobel award, which is awarded by real Nobel Prize winners to those entrants who first make people laugh, and then make people think. Her study, "No Evidence of Contagious Yawning in the Red-Footed Tortoise," won the award in the physiology category of the IG Nobels, which are a parody of the Nobel awards handed out each year. 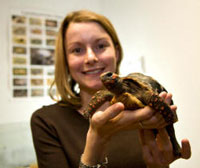 Wilkinson and her staff spent upward of six months teaching the female red-footed tortoise to yawn on command. To achieve this, the scientists used visual stimulus in an effort to get Alexandra to yawn. "We presented her with a red stimulus (a small square piece of paper) and rewarded her whenever she opened her mouth while the stimulus was present," Dr. Wilkinson told ReptileChannel. "After she had learned this we started to reward her only when she opened it slightly wider and so on. . . once she was opening her mouth the appropriate amount we then only rewarded her when she did this and also tipped her head back. It took a long time!" 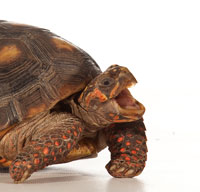 The scientists then introduced the tortoise to 11 red-footed tortoises to determine if the others would follow with yawning of their own, a process that the scientists called "contagious yawning." The 11 other participants however, did not yawn, and Wilkinson and her team found no evidence of contagious yawning.

After running many experiments with eleven other tortoises we found no evidence of contagious yawning at all, and so it does suggest that it may be controlled by a high level mechanism, Wilkinson told the Daily Mail. Though what that exact mechanism is remains unclear.
Wilkinson said that yawning research with primates and dogs suggests that this type of yawning requires empathy and occurs mainly in animals with higher levels of intelligence.

She said current research, mainly with primates and dogs, suggests that contagious yawning may require empathy and therefore was only likely to occur in creatures with high level intelligence. Though the other tortoises did not yawn, Wilkinson was not dismayed with the results of her study. She was almost certain the other tortoises would copy her test tortoise, and even though they did not, she was still excited with the outcome.

The red footed tortoise is one of the most popular tortoises to keep as a pet. It grows to 12 to 14 inches in length and can live for more than 50 years. They tend to have curious personalities and have an ability to adapt to various climates and habitats in captivity.