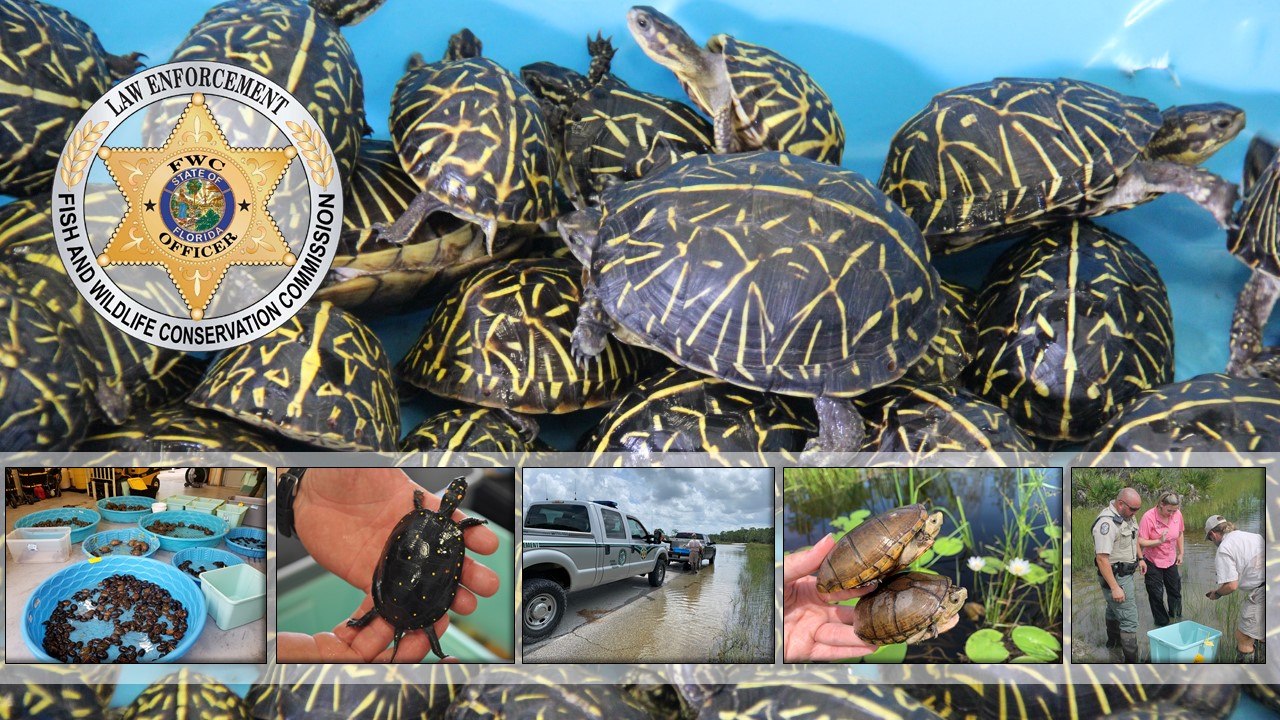 Two Arrested For Poaching More Than 4000 Wild Turtles In Florida

The investigation concluded that the poachers took more than 4,000 turtles from the wild illegally and sold them over a six month period

Two men in Florida were arrested and charged for poaching thousands of turtles native to the state and selling them illegally in Florida with international markets the ultimate destination, The Florida Fish and Wildlife Conservation Commission said in a news release today.

Michael Bosenberg, 39, of Fort Myers, FL, and Michael Clemons, 26, also of Fort Myers, were arrested on multiple charges ranging from possession of marine turtle parts and black bear parts, to the illegal sale and offer for sale turtles taken from the wild, among other charges.

“The illegal trade of turtles is having a global impact on many turtle species and our ecosystems. We commend our law enforcement’s work to address the crisis of illegal wildlife trafficking,” FWC Executive Director Eric Sutton said in the statement released to the media.
“Putting a stop to this criminal enterprise is a significant win for conservation,” said Col. Curtis Brown, head of FWC’s Division of Law Enforcement. “Arresting people engaged in illegal wildlife trafficking supports our environment and legal businesses. It is especially positive and rewarding to be able to release many of the turtles back into the wild.”

The FWC, acting on a tip in February 2018, launched an undercover investigation and determined that a very organized ring of wildlife traffickers were illegally catching and selling native Florida turtles and selling them to large scale reptile dealers and illegal distributors, who then shipped them overseas on the bake market. Bosenberg, according to the FWC, directed others to collect the reptiles, and once he had enough turtles, he would sell them to a buyer who had links to Asian markets, according to the FWC. According to the statement, the poachers depleted so many local populations of the reptiles that they had to expand their range to other parts of the state to meet the growing demand.

“Wild turtle populations cannot sustain the level of harvest that took place here,” said Dr. Brooke Talley, the Reptile and Amphibian Conservation Coordinator for the FWC. “This will likely have consequences for the entire ecosystem and is a detriment for our citizens and future generations.”

The investigation concluded that the poachers took more than 4,000 turtles from the wild illegally and sold them over a six month period. The species included Florida box turtles, eastern box turtles, striped mud turtles, Florida mud turtles, chicken turtles, Florida softshell turtles, Gulf Coast spiny softshell turtles, spotted turtles and diamondback terrapins. A search warrant found the suspects in possession of hundreds of turtles including the skull and shell of a Kemp’s Ridley sea turtle. All the animals seized from the alleged poachers have been evaluated by FWC biologists, who assessed their health and determined their species. More than 600 were returned to the wild, 24 were quarantined and released at a later date and several were retained by a captive wildlife licensee as they were not native to the area in which they were seized.

"We know that the global black market in live animals includes traffickers smuggling protected species of turtles out of the United States, usually for export to the Asian pet market,” said Dr. Craig Stanford, Chairman of the International Union for the Conservation of Nature's Tortoise and Freshwater Turtle Specialist Group. "This sinister and illegal trade threatens the future of many species of North American animals, and as one of the most threatened animal groups on the planet, turtles are at the forefront of our concern.”