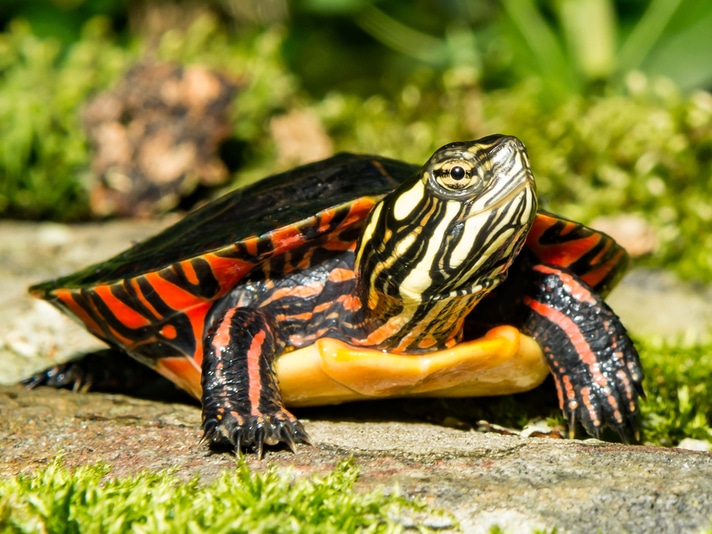 Is it possible to tell a turtle’s age by its shell markings?

Q. Is it possible to tell a turtle’s age by its shell markings?
Dennis Elkston
Frankfort, Kentucky

A. You can make an educated guess, but there’s no clear-cut method of determining the exact age of wild turtles.

When I was a child, it was much simpler to figure out a turtle’s age. Box and painted turtles were abundant where I lived, and my neighbor had a basic formula that he believed in heartily to tally their years: count the plastron (belly) scutes. Boy, that quick method sure made it easy. It wasn’t until the third or fourth one was determined to once again be 12 years old that my suspicions started to set in. What were the chances?

I later read that turtles accumulate growth rings on each scute. They radiate out from each original “baby” scute that remains offset inside each of the larger ones.  The accumulation of rings supposedly occurred like the annuli rings of a tree trunk that are visible when cut. Presumably, a distinguishable, slightly wider ring was left during each warm season of growth. It was bordered by a contrasting ring of a varying color or depth representing a growth lull during winter. That theory seemed to make sense for turtles too, especially those that spend the winter dormant. It neatly explained the widening series of rings on young box turtles and gopher tortoises before they’d gotten too old and worn their carapaces smooth.

Modern studies have shown that turtles’ scute rings represent spurts of growth correlating to abundance and scarcity of food.  During good times growth is rapid. But when food is hard to find, like during droughts or unseasonably cool summers, the carapace slows in growth. A comparison of ring widths is more likely an indicator of feast versus famine conditions during a turtle’s lifetime, not necessarily corresponding to precise periods one year apart.

The quality of food probably also affects the spaces between rings. For instance, a die-off of mammals or birds might occur in the range of a terrestrial turtle, leaving abundant meaty, calcium-rich corpses to be scavenged. The higher protein content in the diet one season, or maybe even for just an intense pig-out month, could trigger a growth spurt that gets recorded in a wider than usual growth space between scute rings. When this phenomenon occurs in captivity from an unbalanced diet, some pet turtles’ scutes pyramid into raised bumps. Sometimes the entire shell resembles a hand grenade — an almost sure sign of being raised in captivity.