Tuatara Evolving Faster Than Other Species

New DNA research suggests that the tuatara is evolving faster than other species.

In a study of New Zealand’s “living dinosaur”, the tuatara, Sphenodon punctatus, evolutionary biologist David Lambert and a team from the Allan Wilson Centre for Molecular Ecology and Evolution have recovered DNA sequences from the bones of ancient tuatara up to 8,000 years old. 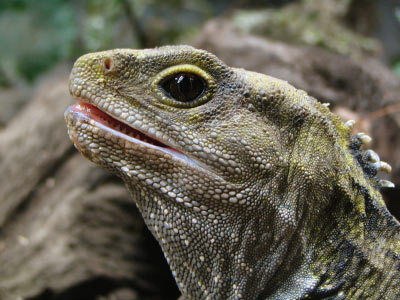 The tuatara is found only in New Zealand and is the only surviving member of a distinct reptilian order, Sphenodontia

They found that although tuatara have remained largely physically unchanged over very long periods of evolution, they are evolving – at a DNA level – faster than any other animal yet examined. The research has just been published in the international journal “Trends in Genetics.”

Lambert said the finding will be helpful in terms of future study and conservation of the tuatara, and the team now hopes to extend the work to look at the evolution of other animal species.

The tuatara is found only in New Zealand and is the only surviving member of a distinct reptilian order, Sphenodontia, that lived alongside early dinosaurs and separated from other reptiles 200 million years ago in the Upper Triassic period.