The agency that was set up to monitor the voluntary protection efforts for the dunes sagebrush lizard is comprised of oil industry lobbyists, according to a report in the Texas Tribune. The Texas Habitat Conservation Foundation was formed, supposedly in an effort to ensure that the agreements laid out to protect the lizard were enforced. While the title of the foundation sounds green and friendly enough, the current board members, Deb Hastings, Robert Looney and Mari Ruckel, are all lobbyists for the Texas Oil and Gas Association, the report said. 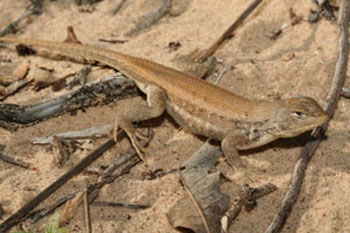 The foundation was formed when a Texas A&M University request for proposal for a contractor to oversee contacts with landowners and oil companies that signed up for a program to save the lizard went unanswered. The Texas Oil and Gas Association then submitted a plan to Texas Comptroller Susan Combs whereby the lobby group would create a nonprofit foundation that would oversee the program that is suppose to ensure landowners and the oil companies work to protect the lizard. Combs approved the plan that is now in place.

"The comptroller is very pleased that the work done by all of the stakeholders involved in this process resulted in a plan that caused the U.S. Fish and Wildlife Service not to list the DSL," Combs spokesman Lauren Willis told the paper. "We are proud of the role we played in that process and the work we did to save the West Texas oil and gas economy."

Even though the comptroller is providing regular updates as part of the agreement, some disagree with the comptroller's actions in this case as well as her oversight of endangered species, including Republican Sen. Kel Seliger of Amarillo, who represents much of the Permian Basin as well as a lot of the habitat of the sagebrush lizard. He has voiced the concerns by independent oil companies that the gas association would oversee the mitigation efforts of the entire industry, which some see as a conflict of interest.

Others, such as biologist Jay Lininger with the Center for Biological Studies thinks the fact that oil industry lobbyists are overseeing a potential endangered species candidate is ludicrous.

"This is a case of the fox guarding the hen house,” Jay Lininger, biologist at the Center for Biological Diversity, told the paper. The Center is preparing to file a lawsuit over the state-federal conservation plan. "If the oil and gas industry is regulating itself, then Americans have no hope of a quality environment,” Lininger said.