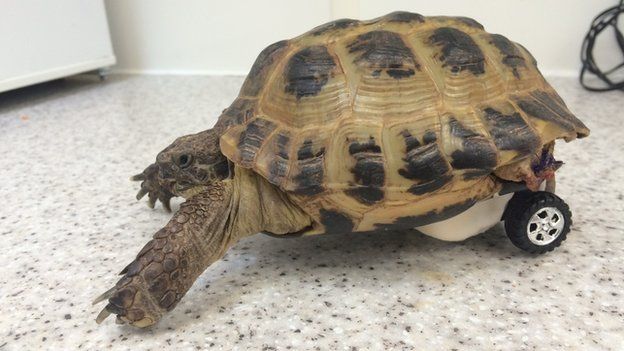 Tortoise In England Outfitted With Hot Wheels To Aid Walking

A tortoise in Withywood, Bristol, England that had to have one of his hind legs surgically removed because of an accident is back in the saddle a

What This Guy Found in His Beer Will Gross You Out
A Year Later, English Boy Enjoys His Mediterranean House Gecko Stowaway
California Red-Legged Frog As State Amphibian?

A tortoise in Withywood, Bristol, England that had to have one of his hind legs surgically removed because of an accident is back in the saddle as the veterinarian that is caring for him attached a removable wheel to his plastron to prevent further damage to his shell.

Tortoise That Lost Legs to Rat Bites Gets Wheels

The operation, which took 90 minutes to complete, involved attaching the base of a Hot Wheels car to the shell of the tortoise with a special resin. It took Touche all of an hour to figure out how to move about with the wheels.

"It can be taken off in the future if we feel that he has enough strength to hold himself up, but he could be fine with a wheel for the rest of his life” Veterinary surgeon Sonya Miles told the BBC. "He may even need a bigger one fitted at some point as tortoises carry on growing until they are between 10 and 15 years old so he could still double in size."

Touche’s owner is equally pleased with the outcome of the surgery.

"He is doing really well and is happily moving around the garden,” Lisa Purnell said. "As he grows he may have to have a bigger wheel fitted or we may be able to take it off completely if he is managing on three legs. We won't know for a while but at the moment he is absolutely fine."