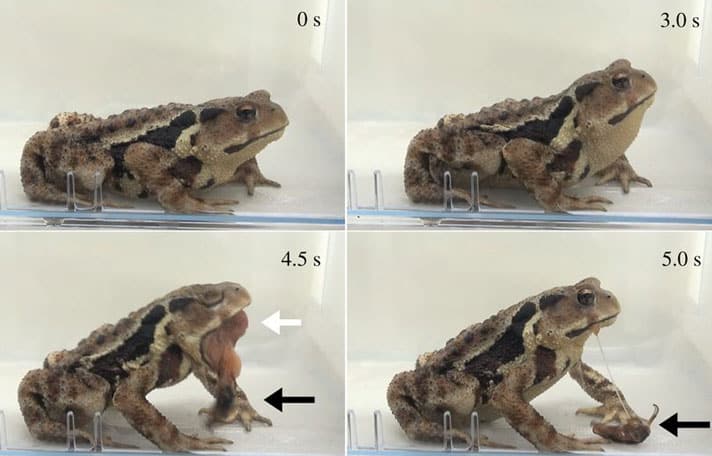 The bombardier beetle has a novel defense when ingested, it lets loose a toxic chemical spray from its abdomen.

Arkansas To No Longer Issue Permits To Breed, Sell And Import Five Python Species
Keeping And Breeding The Minor’s Chameleon
Indian Biologist and Turtle Specialist Chandrasekhar Kar Passes Away at 58

Frogs and toads are pretty opportunistic eaters. Many will eat whatever critters they can fit in their mouths. But there is one insect that a toad had better think twice of eating, the bombardier beetle (Pheropsophus jessoensis).  This particular beetle has a very crafty defense mechanism. It tends to explode out a toxic chemical concoction when it is eaten, and that is just what happened when Japanese toads (Bufo japonicus) ate them in an experiment conducted by Shinji Sugiura, Takuya Sato of Kobe University, to determine how the beetle would react when eaten by the toad.

In one instance,  researchers placed a juvenile toad in an enclosure with a bombardier beetle and 88 minutes after swallowing the beetle, it regurgitated it, as the beetle let loose its toxic chemical concoction from its abdomen. The beetle came out alive, having successfully survived inside the digestive system of the toad. They had similar results with other toads but noticed that the younger toads vomited the beetles more frequently than the larger toads. They conducted the study with two toad species, Bufo japonicus and B. torrenticola. They found that B. torrenticola vomnited more often than B. japonicus  and also had a more potent digestive capability.

The researchers noted that soon after the toads swallowed the beetles, they heard an audible explosion of the chemicals being released. All 16 beetles that were vomited by the toads survived inside the digestive systems of the toads, and 93 percent survived at least two weeks. The longest surviving beetle lived for 562 days after it was initially eaten by a toad. No toads died from eating the beetles.