Seasonal temperature fluctuations are the key to success with Boa constrictor imperator.

Breeding the boa constrictor (Boa constrictor imperator) can add great excitement to the keeping of this great reptile. Boa constrictors are live-bearing animals, and they are considered by some to be more difficult to breed than many other commonly kept snakes. Follow these tips, however, and you will be well on your way to producing litters of healthy baby boas! 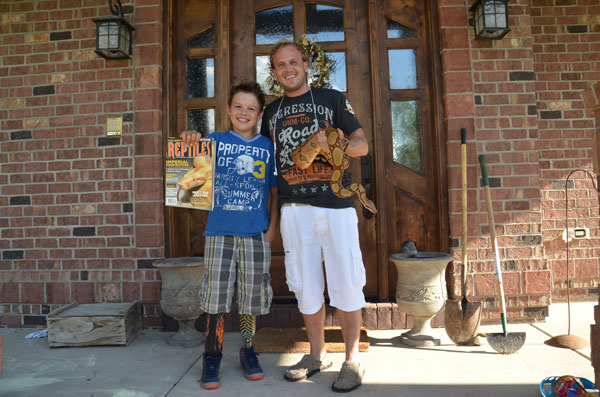 The authors, Jackson and Jeremy Stone. Jackson is holding a copy of the January 2007 issue of REPTILES, which featured Jeremy’s previous boa article, "The Emperor Strikes Back.”

Boa constrictors can breed when they’re younger, but in our experience it is best to wait until they’re about 3 years old. It is also recommended that standard-sized female imperators weigh at least 8 pounds before you attempt to breed them. Males reach sexual maturity at 18 months of age, but it’s better to wait until they are at least 4 feet long to start breeding them.

A seasonal shift in temperature is needed to induce boa constrictors to breed. We keep our boas at an ambient temperature of a low of 82 to a high of 85 degrees Fahrenheit from June until October. In October, we lower their temps to a low of 75 and a high of 82 degrees. Be sure to feed your boas one prey item a week before you lower their temperature, because once you lower the temps, males typically won’t feed, or will only sparingly. After their temperatures have been lowered, offer your boas smaller prey items weekly, and keep fresh water available at all times. 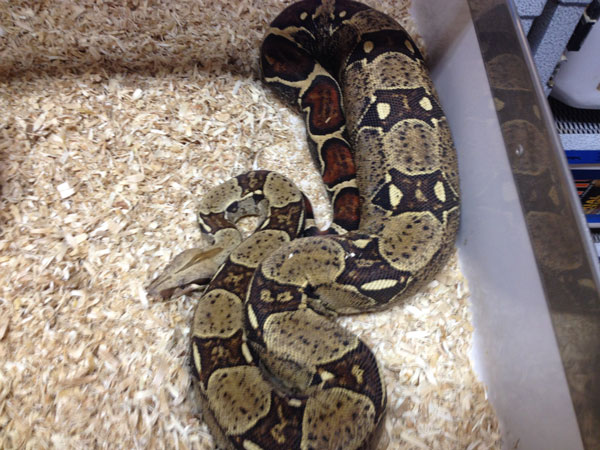 This female boa is gravid. Babies should arrive within four months.

From late October through March we introduce males to females in breeding cages, in which one-quarter of the enclosure is maintained at a constant 88 degrees. This allows a range of temperatures for the females to develop properly sized egg follicles, as well as to aid digestion of any meals the snakes do accept and to prevent illness, such as respiratory infections. 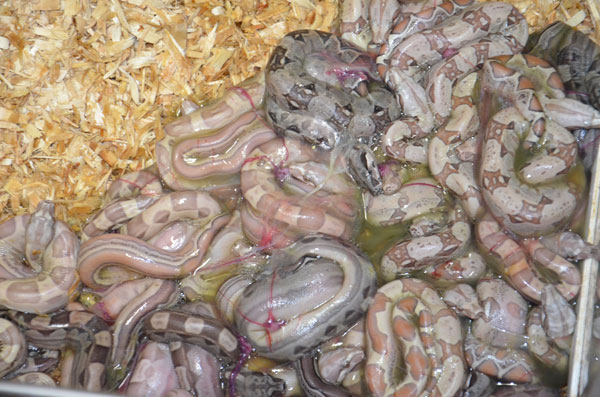 Live baby boas are born encased in a membrane.

Males will expend a lot of energy courting and breeding with the females. For the best breeding success rate, breed one male to the same female throughout the entire breeding season, separating them for a few days a week for feeding and rest (do not feed them when they’re in the breeding enclosure together).

We gradually raise the temperatures in their "home” enclosures beginning in March through May and are usually finished introducing males by April. During the breeding season a female may ovulate and become gravid. If not, she usually will shortly after the male is no longer being introduced, and after she ovulates a healthy litter of baby boa constrictors should be born within four months. 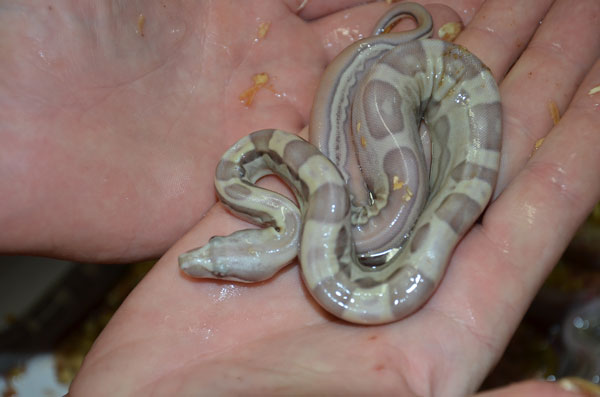 Boas produce babies only once a year, and the average litter is about 16 babies, though some larger boas have produced litters of more than 50! Female boa constrictors average three to five litters over their captive life span. We separate the babies from the female and place them all together in a 32-quart tub. Fresh water is available, and the tub is kept humid. The baby boas usually ball up together in the tub. Within 10 days they begin to shed and at this time we separate them into individual plastic containers measuring 4 inches wide by 11 inches long by 3 inches tall. The babies’ enclosures contain aspen bedding and fresh water, and the baby boas will often burrow into the aspen to feel secure. We wait until the babies are 2 weeks old before offering them one small mouse once a week for the first few months of their lives. We’ve noticed they seem to do better on mice than rats.