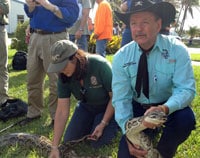 Outfitted with transmitters, it is hoped these males will lead biologists to female pythons.

Officials with the Florida Python Challenge 2013 have updated the number of Burmese pythons (Python molurus bivittatus) captured during the month long hunt to 68. The officials also announced that the biggest male snake captured was implanted with a pair of transmitters and released back into the wild in hopes the snake will lead wildlife officials to breeding females. In all, three males that were captured during the hunt were outfitted with transmitters and released.

"It's breeding time and females attract males and we have three eager young lads sitting out there with radio transmitters on them who can lead us to the breeding female and we can catch her," Frank Mazzotti, professor of wildlife at the University of Florida who helped organize the challenge, told ABC News.

The tagged pythons are also expected to give biologists a better understanding of the invasive species including where they tend to congregate as well as other habits. Mazzotti said the plan is to recapture the three big males in April, which marks the end of the breeding season. He is hoping that the males will lead them to pregnant female pythons, which they can then remove from the ecosystem as well.

The $1,500 Grand Prize for capturing the most Burmese pythons in the general competition was awarded to Brian Burrows. Burrows harvested six pythons. The 2nd place $750 prize in the general competition went to Bill Booth, with five pythons captured. Ruben Ramirez, who was competing in the  python permit holders Competition, took 1st place with 18 snakes captured. The 2nd place prize was awarded to Blake Russ, who captured five pythons.

The Burmese python is an invasive snake that can be found in the Florida Everglades. The snake can grow to more than 20 feet in the wild and weigh more than 200 pounds. The snake's native range is in Southeast Asia, including Thailand, Vietnam, Indonesia, and Myanmar. The United States banned the importation and transportation of the Burmese python and several other species in March 2012. You can read ReptileChannel's Burmese python care sheet here.

Burmese Pythons in the Everglades