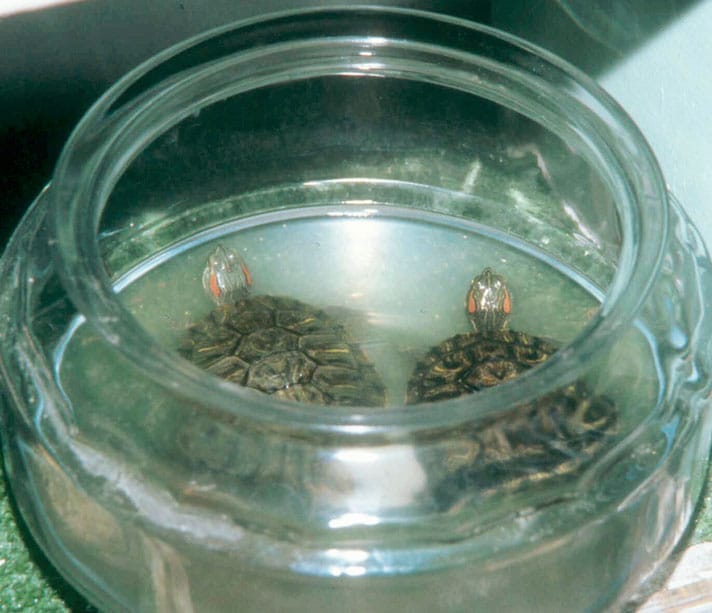 The Vet Report: Salmonella In Reptiles

In the 1970s, red-eared sliders were so popular in the pet trade that they were actually raised in human sewage ponds —hence the source of the Salmonella

Certain topics seem to make the rounds every few years. Artificial lighting, inclusion body disease, nutritional-metabolic bone disease and antibiotics are just a few. It seems that lately I’ve had several questions about Salmonella infection in reptiles. I checked my archives, and it has been more than five years since I discussed it. So, here we go again—it is an important topic and worth reviewing for the old timers, and especially important for those new to working with herps. 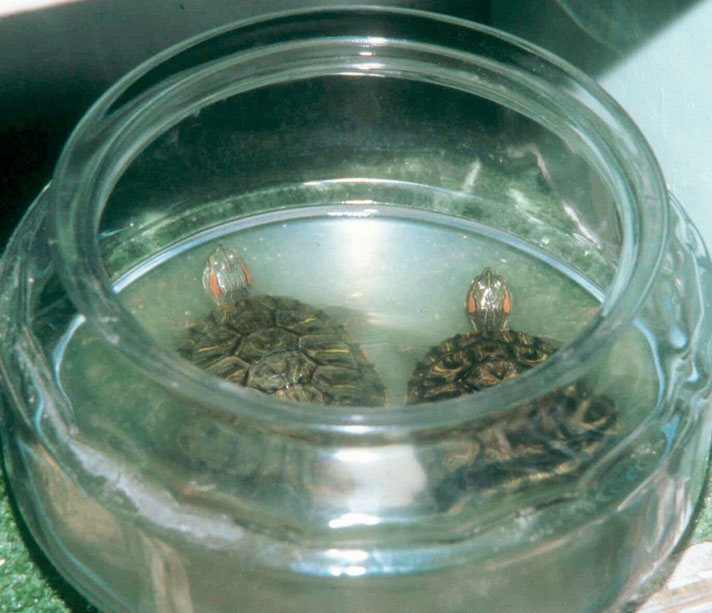 The original Salmonella health scare started with the sales of baby red-eared slider turtles back in the early 1970s. These turtles were raised in human sewage ponds and then sold in the pet trade.

Salmonellosis, the disease caused by the Salmonella bacterium, is perhaps the most infamous zoonosis (a disease transmissible between animals and people) associated with reptiles. The Salmonella epidemic started with the red-eared slider turtle (Trachemys scripta elegans), the reptile that received the majority of the negative publicity. At that time, the slider was the most common reptile kept as a pet in the United States. These turtles were so popular in the pet trade that they were actually raised in human sewage ponds —hence the source of the Salmonella.

In the early 1970s, it was estimated that about 280,000 cases of human salmonellosis were contracted from pet turtles. In 1975, the Food and Drug Administration passed a law stating that it was illegal to sell viable turtle eggs or live turtles with a carapace or shell length of less than 4 inches in the U.S. This size was picked simply because it was felt that anything larger than 4 inches could not be placed in a child’s mouth.

In people, Salmonella is transmitted by fecal-oral contamination. That means infection occurs when a person places objects or food in their mouth after handling Salmonella-contaminated material without utilizing proper hygiene. Interestingly, pet stores still sell the little turtles under the guise of “research, teaching and display,” all caveats that exempt them from the USDA regulations.

There are over 2,000 serotypes of Salmonella. All of these serotypes are potential threats to humans. Reptiles are known to carry only about 200 of these. Salmonella bacteria are found in many different animal species, not just reptiles. Birds (eg. chickens and seagulls) fish, insects (eg. cockroaches and other bugs,) and hermit crabs – not to mention mammals, such as dogs, cats, ferrets, rats, mice, etc.—can all potentially carry Salmonalla. Humans can also carry Salmonella and not show signs of disease—the most infamous case of this was Typhoid Mary, a person who worked as a cook and infected more than 50 people, three of which eventually died.

Diseases Passed From Reptiles To Humans

Salmonellosis is not a disease to be taken lightly. Once infected with Salmonella, the symptoms of diarrhea, fever and abdominal cramps usually start within 12 to 72 hours of infection and can last from four to seven days. The Center for Disease Control (CDC) estimates that there are approximately 40,000 confirmed cases of human salmonellosis reported annually in the U.S., and of these, an average of 400 deaths.
Young, old and immunocompromised individuals are the most susceptible to . However, that said, it is also not that easy to contract Salmonella if you practice simple hygiene when working with your herps. I have been working with iguanas (and all other species of reptiles) for more than 35 years and have never once fallen ill to Salmonella.

To put this whole problem in perspective, people are at a greater risk of contracting salmonellosis from uncooked chicken than they are reptile pets. Never eat or drink when working with or handling reptiles. Never clean herp supplies (water and food bowls) or cages in areas where human food is consumed or prepared. Always wash your hands when finished with your reptile chores. If you think you may have contracted Salmonella, from your herps or otherwise, contact your physician immediately.

The CDC have published a position statement that “most, if not all, reptiles carry Salmonella.” That said, there are no reptiles that are less likely than others to be potential carriers. An animal can be tested for Salmonella, but be careful, as there are potential false negatives. It is better to just assume that any reptile you have may be a carrier and use proper hygiene practices.
There is an excellent reference source that was co-written by the Association of Reptile and Amphibian Veterinarians and the CDC on Salmonella. Ask your Herp veterinarian for a copy.