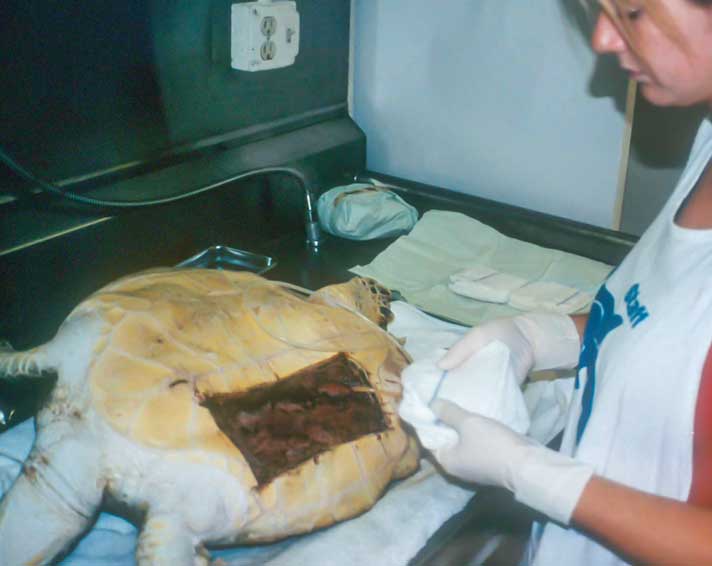 The Vet Report: Puka, The Sea Turtle With A Hole

When Puka came to the Turtle Hospital, the director at first wanted to euthanize her. My first thought was that I had to agree. A hole in a sea turtle —not good.

I can’t tell you how many patients I have treated over my career. While every one of them has been important, there are those that stand out, either because they were miracle saves or total disasters. Fortunately, there have not been too many of the latter.

I had one sea turtle case that I will never forget. Puka, which is the Hawaiian word for hole, was the name of this little green turtle (Chelonia mydas). I had only recently started caring for the sea turtles at the Marathon Sea Turtle Hospital in the Conch Republic when she arrived. 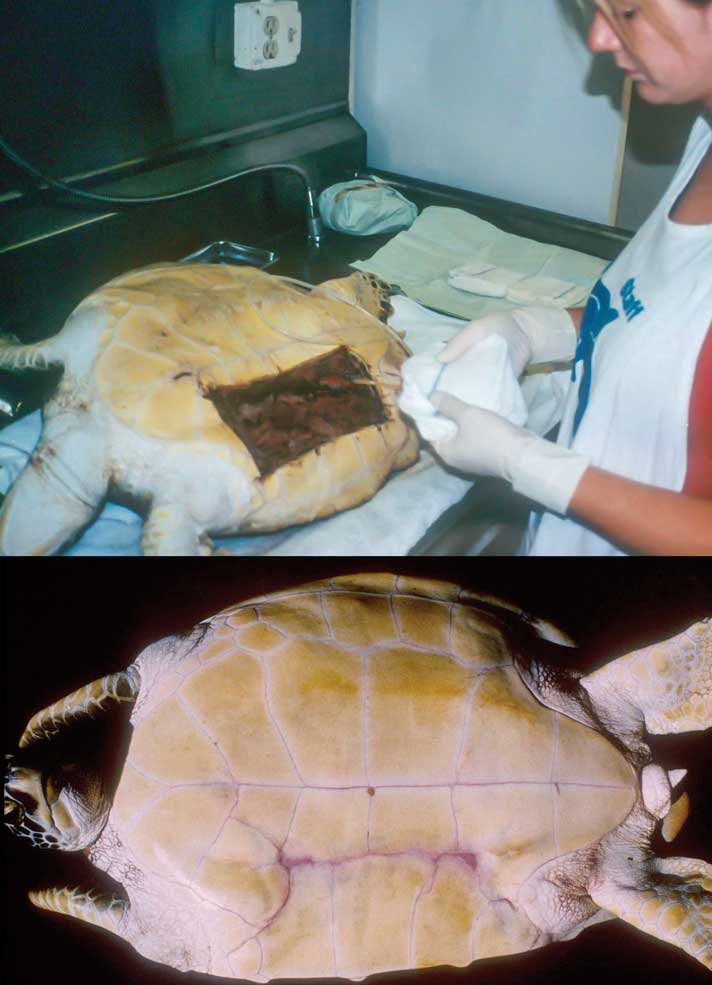 The turtle had been seen at another facility and was treated surgically for an impaction. Unfortunately, things did not go so well and her procedure went horribly wrong. When the turtle arrived and I did an exam, it wasn’t hard to see the problem—a 6-by-12-inch hole had been cut into her shell. When they tried to reattach the piece of removed shell, it did not incorporate back into the plastron. The piece of bone in the section of shell necrosed from a lack of blood supply and lost viability, literally leaving this half-square-foot hole directly into the turtle’s coelomic cavity. Hence, that is how Puka got her name.

I grew up in Hawaii and had worked on honu, the Hawaiian word for sea turtles, for years. I was fluent in Pidgin English (a blend of English and, well, a million other languages). So when I saw the honu with the hole in the shell, naturally, I had to call her Puka.

A sea turtle with a hole in the shell is much the same as a submarine with a screen door. Neither is compatible with life.

When Puka came to the Turtle Hospital, the director at first wanted to euthanize her. My first thought was that I had to agree. A hole in a sea turtle —not good. But, then my ego and spirit entered the picture—I don’t like to walk away from a challenge.

The first thing was to make sure she did not suffer. We immediately started her on antibiotics and pain medication. When she arrived, she was in a dry tub—obviously not able to be placed in the water considering her condition. We packed her large hole with sterile gauze and wrapped it tight to protect her internal organs. She was then started on tube feeding—a mixture of greens and squid—providing some necessary extra protein to help her heal.

Although I have been a veterinary surgeon for years, I had never been faced with a problem like this. We see large defects in the skin and musculature in dogs and cats all the time. These large areas are generally closed with hernia mesh, just like they use in humans. But that is in an animal that lives on dry land, not an animal that lives in the water. How long could I keep little Puka dry in order to give the mesh a chance to heal?

In the old days, when it was still legal to collect sea turtles from the wild for the food trade, the sailors would put them in the hold of the ship, upside down, for months and the animals would live. With that knowledge, we decided to do what we could to fix this turtle with the hopes of one day returning her to the wild.

After a week of daily nursing care, pain medications, wound cleaning and bandage changes, I took Puka to surgery and implanted a polytetraflouroethylene (PTFE) graft into the hole. What is PTFE? It is Gortex! Yes, the same stuff used to make hiking shoes and backpacks. The stuff is tough! And when prepared aseptically, it makes one heck of a surgical graft.

The bone-white, mesh graft looked so odd in the middle of a yellow-green shell. You were certain that it had no chance of working. How could a piece of MESH keep water out of the inside of a seaturtle?

Over the next four months, Puka was kept dry docked, covered with petroleum ointment to help prevent dehydration and blanketed with moist towels. She was given frequent tube feedings of water, vegetable slurry and blended squid in Gatorade. Her bandages were changed daily, much the same as one would do with a third-degree burn patient.

At first, it did not seem like anything was happening with the graft. But by the end of the second week, you could see actual healthy tissue start to grow into the edges of the white mesh. Within about four weeks, the entire mesh was covered with new, pink tissue.

As the graft incorporated into what used to be the large hole in the turtle, we noticed that the shell started to also grow over the graft and slowly migrate into the center of the large defect. By four months, the hole had filled in with new, healthy shell, and she was returned to the water!

I know this sounds anthropomorphic, and frankly, I don’t care, but I swear we all saw Puka smile when she was allowed to swim for the first time.

After a short rehab period, where we watched her swim, gain her strength, relearn to eat on her own and made sure that the newly healed shell would not have any problems, she was returned to the ocean. We took her out on a boat for, hopefully, her last interaction with humans, and released her several miles offshore.

She is now swimming in the vast ocean, meeting other turtles and making babies for future generations of our kids to enjoy.