The Ultimate Ambassador For Reptile Conservation

Meet Baru, the giant saltwater crocodile now on view at the Toledo Zoo.

Before he was formally christened Baru, he was known only as "The Big Guy,” and a big guy he is! At 17 feet and 1,500 pounds, Baru is the largest reptile in captivity in North America. Even by the standards of the world’s largest reptile, the saltwater crocodile (Crocodylus porosus), Baru is a colossal specimen. 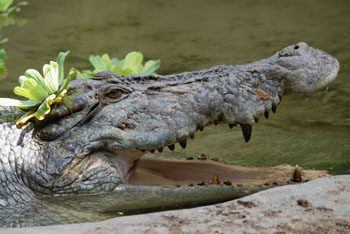 Baru settles in to his new home at the Toledo Zoo.

Commonly called a "saltie” in Australia, the adult maximum size of a male saltwater crocodile is usually 15 to 16 feet. It is rare for any to exceed 16 feet, and few approach the dimensions of Baru. Just a very small number of crocodiles have ever come near the world’s record for the species of over 20 feet. The largest saltie ever captured alive was an animal in the Philippines in 2011, named Lolong. He was just over 20 feet, but he died in February 2013, moving Baru up the list of the largest crocodiles in captivity. There are few that are larger. According to Guinness World Records, the largest saltwater crocodile in captivity today is Cassius, who is housed at Marineland Melanesia on Green Island, Australia. Cassius is 17 feet, 11 inches, and Baru is not far behind at 17 feet. 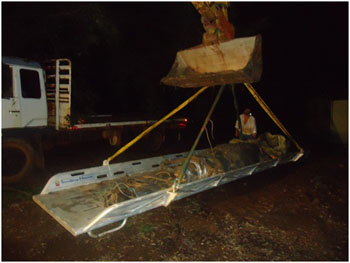 In the summer of 2012, the Toledo Zoo began to pursue the acquisition of a large saltwater crocodile for its upcoming Australian exhibit, "Wild Walkabout.” The saltwater crocodile was to be the keystone species to highlight the diversity of wildlife from Down Under, and to tell the story of model conservation success. We first explored options within the United States, but it quickly became apparent that no animals were available. So our search turned to Australia, which is one of the few places that saltwater crocodile populations are secure because of careful wildlife management. In Australia, adult male crocs in the 15-foot range are common. 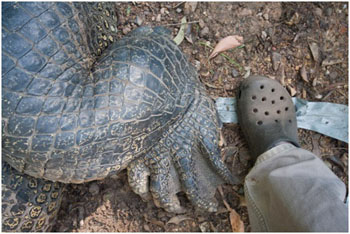 Baru is a truly massive animal, as illustrated by this photo comparing croc to Croc.

To our surprise, our inquiries were answered with a remarkable opportunity: a 17-foot croc that in 2010 had been captured in a billabong in the Daly River system, south of Darwin. Its capture was one of necessity, as the croc posed a grave threat to local ranchers’ cattle.

Most captured nuisance crocodiles are transferred into the breeding stock at Australian crocodile farms. It was only after capture that Baru’s massive size was discovered, and he was deemed too special to be just "breeding stock.” We knew he could be an impressive ambassador for Australia’s diverse wildlife at the Toledo Zoo’s new exhibit.

Successfully transferring live reptiles long distances is difficult enough, but not only was Baru massive, he literally was on the other side of the planet. It was clear that this needed to be a multinational team effort to undertake the numerous logistical tasks on both sides of the Pacific. Permits, transportation and customs clearance would all need to be handled in the United States and in Australia.

To deal with logistics on the other side of the Pacific, the zoo worked closely with Dr. Adam Britton in Australia’s Northern Territory. Adam is a well-known crocodilian biologist with extensive experience in crocodilian capture, transport, biology and ecology. He helped coordinate all the tasks necessary to land Baru in the United States. The Toledo Zoo then chartered a special cargo plane to give Baru first class accommodations for his final flight to Toledo Express Airport.

The Toledo Zoo has extensive experience with crocodilians and the staff has an excellent knowledge of crocodilian biology and management. Over the last 20 years, the Toledo Zoo has successfully reproduced both Cuban (Crocodylus rhombifer) and African slender-snouted crocodiles (Mecistops cataphractus). However, our facilities were not designed to house a massive animal like Baru, so major renovations were necessary.

The zoo’s construction department took on this challenge, and in fewer than seven months a brand-new exhibit was operational—a remarkable achievement if you consider the immensity of these renovations and the age of the Reptile House at the Toledo Zoo. The original building was designed by the famous herpetologist, Dr. Roger Conant, and it was constructed in the early 1930s. It is still a very functional husbandry facility with a majestic main hall and 1,800 square-foot solarium. Baru’s new home would be the solarium. The existing pool was expanded from about 5,000 gallons to more than 16,000 gallons, a basking beach was added, and the entire facility was upgraded. All this had to be completed before Baru would be given the final permits to leave Australia.

At about 3:40 p.m. on April 3, 2013 Toledo time (4:10 a.m. in Darwin), Baru was taken out of his holding pond, sedated and carefully moved into his custom crate. The crate measured about 10 by 6 by 2.5 feet, and with Baru inside, it weighed a whopping 2,061 pounds. Its dimensions had to be limited so it would fit through the cargo door of the transport planes. Baru was comfortably arranged inside the rectangular crate.

From there it was off to Darwin International Airport, then to Brisbane, then to Sydney, then over the Pacific to the Dallas/Fort Worth airport. All the while, Baru was accompanied by Dr. Britton, who would monitor Baru’s well-being and level of sedation. In Dallas, Baru and Adam were met by a Toledo Zoo veterinarian and the zoo’s registrar for a health check and to expedite Baru’s transfer. On the evening of April 5, Baru landed in Toledo on a special chartered flight from Dallas. By midday, April 6, he was already settling into his new enclosure.

Baru is remarkable in more than size; he is a near-perfect specimen. Male crocodiles are well known for their intolerance of other males, and combat is frequent. These encounters are not benign and major injury and even death can occur when one male crocodile challenges another. The spoils of victory are territory, females or other resources. Recent studies indicate that adult male salties fall into two general categories: dominant resident males that have distinct territories, and subordinate nomadic males that move through long distances, going into and out of areas defended by resident animals. Baru was certainly a dominant resident male, and it appears that few males were willing to face the dangers of an encounter with him.

Toledo Zoo staff view Baru as more than a great specimen; he is an ambassador for conservation. The fact that he is at the Toledo Zoo is a testament to the success of conservation efforts to save the salties of Australia. Largely gone by the 1970s from over-hunting, the protection and management of saltwater crocodiles since then has been profoundly successful. Now the saltwater crocodile has recovered and is seen as a great economic resource for the people of the Northern Territory with tourism, farming, ranching and regulated hunting all included in the management of the largest, and arguably, the greatest reptile, that survives today.

Baru enables Toledo Zoo visitors to see and learn about this amazing crocodilian, as well as other species, habitat, and challenges. Getting this close to a gigantic saltwater crocodile is an opportunity few, if any, visitors would have otherwise, and it is an encounter they will long remember.

Crocodilians as Pets
Although there are a few small species that may be possible for the general private collector to maintain, crocodilians do require significant investment to provide appropriate housing. The first consideration when acquiring any animal should always be, "What I am going to do with it when it is fully grown?”
Baby alligators are still sold into the pet industry; however, few people seem to realize their small alligator could easily grow to be six to 12 or more feet in length, depending on the alligator’s sex. Don’t expect your local zoo to be able to take your animal. They just do not have the resources, and zoo collections are carefully planned and managed.

The author would like to thank Block Communications, Inc. and Mercy for supporting the effort to acquire Baru.

R. Andrew Odum is the Assistant Director of Animal Programs/Curator of Herpetology at the Toledo Zoo.