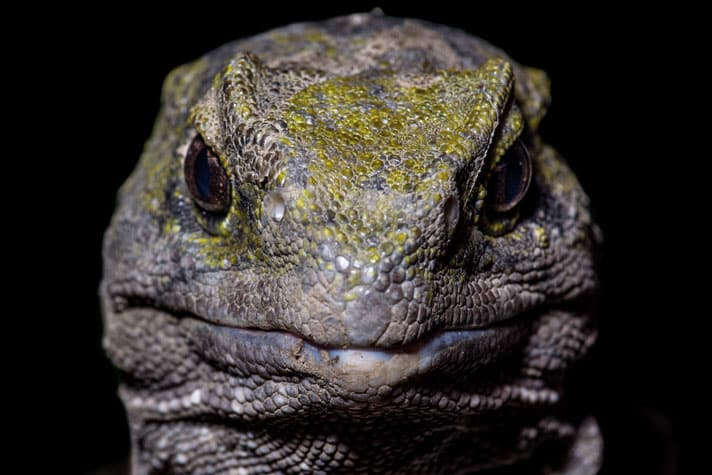 A herper discusses his tuatara-centric visit to New Zealand.

As I lay on my stomach, watching from a distance, the tuatara slowly emerges from its burrow. The ground is just starting to warm as the sun begins to cover a small open patch near the edge of the cliff, illuminating the pronounced spines that run along th creaure’s back. Waiting for what feels like hours, I can’t help but imagine how many times this exact scenario has played out over past millennia. This animal certainly looks like it would fit in with prehistoric landscapes, seemingly unchanged over the course of history. However, this species and the ancestral ones that came before it lived through events that wiped out countless others. The reasons for its success may be varied, but one thing is certain — the tuatara is a survivor in every sense of the word. 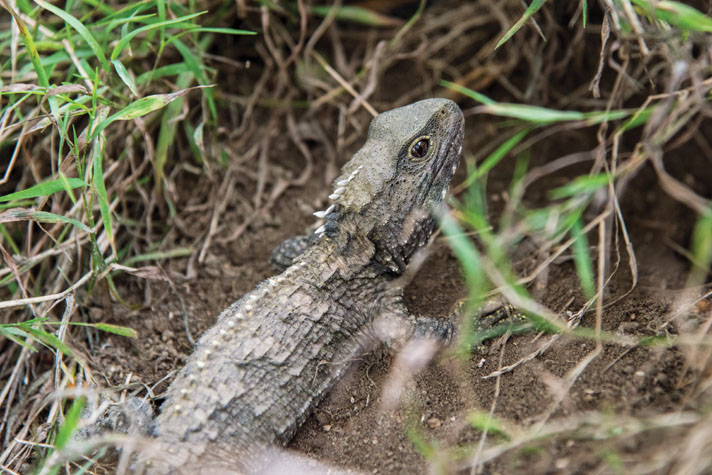 A wild tuatara the author photographed on Matiu/Somes Island.

Tuatara Are a Reptile Unlike Any Other

Endemic to New Zealand, the tuatara (Sphenodon punctatus) comes from an ancient lineage of reptiles and is the only living member of the order Rhynchocephalia. I have been fascinated with the animal for many years due to its unique biology that sets it apart from other living reptiles. A cursory glance at it may lead you to believe that the tuatara is a lizard, conventional in every way. However, by taking a closer look it quickly becomes apparent that it is anything but conventional. 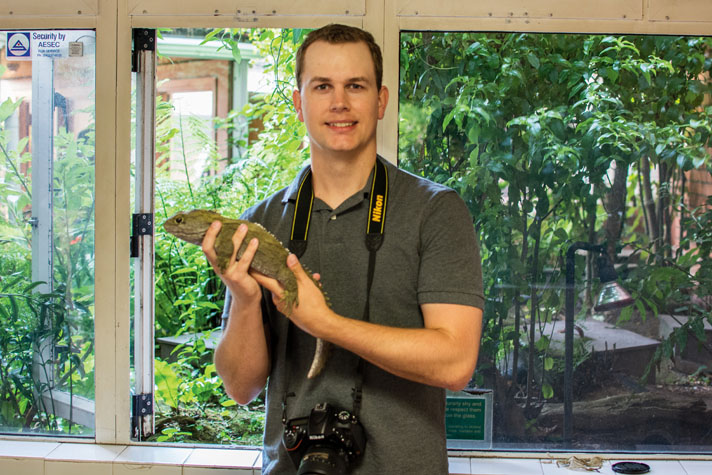 The author holds a tuatara at Victoria University of Wellington.

The tuatara is the only living species that fully possess gastralia. Sometimes referred to as “belly ribs,” these bones run along the bottom portion of the abdomen and are not directly attached to the spine. They are a very primitive trait and shared only with extinct species of early tetrapods and crocodiles, which possess partial remnants. Gastralia, combined with small projections on the ribs known as uncinate processes, are believed to have been used as a type of primitive exoskeleton for early tetrapods that were just emerging from the water.

Unlike any other living reptiles, male tuatara also lack a penis or any external reproductive organ, making their mating behavior more similar to that of many birds, in which sperm is delivered into the female during a “cloacal kiss” rather than via the penetration of a penis. Top this off with the fact that tuatara have two rows of projections on their upper jaw that act as teeth, even though they aren’t teeth, and tuatara begin to look a lot different than the lizards to which they were previously compared. 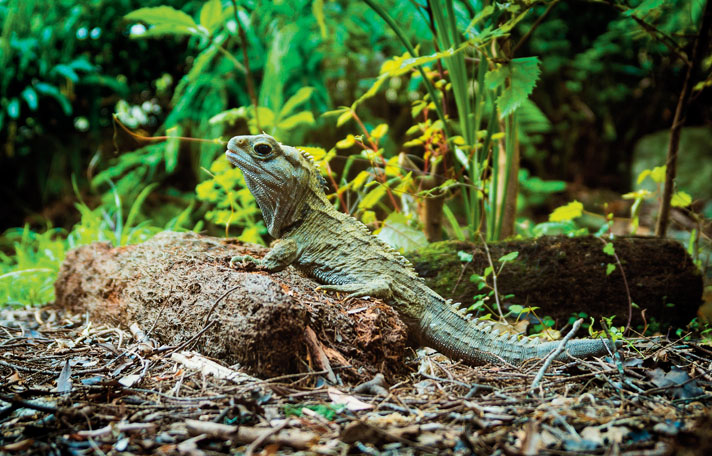 The tuatara is the only living member of the order Rhynchocephalia.

New Zealand is fairly cold compared to most places where reptiles are found, and tuatara have adapted quite well to the country’s chilly climate. This is reflected in many facets of their behavior. Seemingly doing nothing quickly in life, they rarely even move. They aren’t fully mature until around their teenage years, with females only laying eggs every two to five years — eggs that can take over a year to hatch. Luckily, it is believed that tuatara can live in excess of 100 years, which is fitting for their slow lifestyle.

Over the millennia, tuatara have evolved to cope very well with natural challenges. To avoid avian predators, they freeze, blending in with their surroundings. Occasionally, they may dash to their burrows. These adaptations proved useless as humans began arriving to New Zealand, bringing rats and other animals with them. Eventually, all of the tuatara on the mainland were killed by these introduced pests and habitat destruction. The only surviving populations remained on 32 smaller offshore islands, where rats could not reach and humans did not drastically alter the landscape.

In recent decades, thanks to the work of dedicated conservationists, tuatara have made a comeback. By eradicating the pest populations on smaller islands, these people have been able to reintroduce tuatara and establish breeding populations once again. It is a continual effort to keep the islands pest-free, and a great deal of work goes into ensuring that they remain that way. Many islands are not accessible to the public, and the ones that are adhere to strict quarantine protocols. While many tuatara populations are technically stable on the islands, reintroduction of rats and other invasive mammals could quickly prove catastrophic.

To learn more about the tuatara and conservation efforts on its behalf, I met with Dr. Nicky Nelson, an associate professor at the School of Biological Sciences within Victoria University of Wellington. Dr. Nelson oversees several current (and past) research projects that are relevant to the future of the tuatara. These include studying the effects that climate change will have on the species. Tuatara have surely survived climatic changes in the past, yet as the predicted temperature increase comes at a faster pace than ever, previously unseen consequences may result. The sex of tuatara, as with many other reptiles, is determined by the temperature at which their eggs incubate. If the average temperature rises by even a couple of degrees, there is a possibility that it can skew the male to female ratio enough to have a negative impact. On North Brother’s Island in the Cook Strait, the population of male tuatara has already risen to approximately 70 percent. 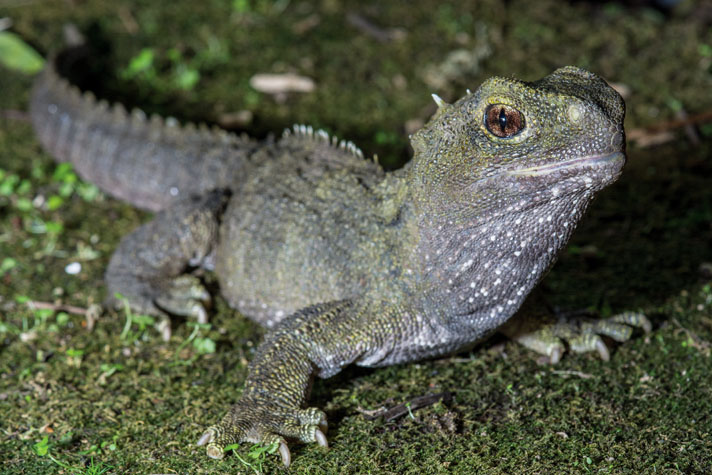 Tuatara are making a comeback on smaller islands where pests such as introduced rats have been eradicated by conservationists.

Dr. Nelson is working to identify what the future of tuatara looks like by moving them further north. Because New Zealand is in the Southern Hemisphere, translocation of tuatara to more northern islands means warmer weather and allows a preview of what will happen on the cooler southern islands. Seeing as how tuatara potentially have a lifespan of more than 100 years, drastic temperature changes could happen over the course of one lifetime, and we don’t have 100 years to see what happens.

However, Dr. Nelson is quick to point out that climate change is not all doom and gloom for tuatara. A slight increase in temperature could place the southern populations in a more favorable climate, allowing them to thrive. Populations on islands with more habitat diversity may also cope much better due to having more options for nesting sites. The long-term outlook for how climate change will affect tuatara may be unclear, but Dr. Nelson emphasizes that the future of tuatara conservation revolves around the restoration of entire ecosystems where they reside.

Where to See Tuatara

I didn’t travel all the way to New Zealand just to talk about tuatara — I wanted to see them with my own eyes. While many of the islands they inhabit are inaccessible to the general public, there are ways in which visitors to New Zealand can experience tuatara personally. 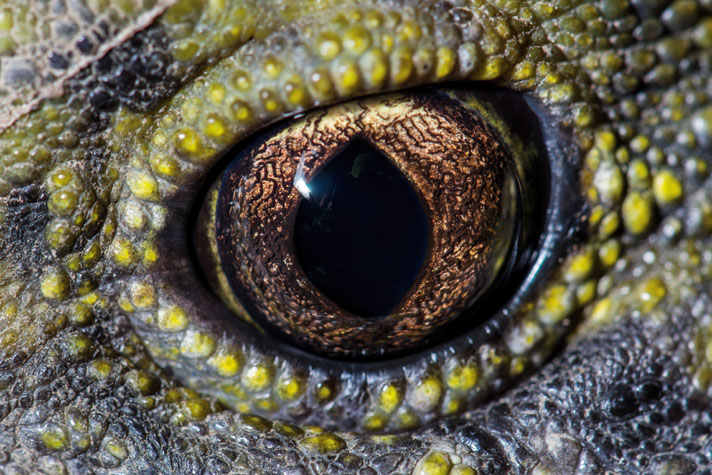 Close-up of a tuatara eye.

After meeting with Dr. Nelson, I took a 20-minute walk to a ferry from Wellington Harbour to Matiu/Somes Island. After having been used as a quarantine station, internment camp, and military post for the past couple of centuries, thousands of volunteers worked to reestablish the island’s native flora and fauna, and it opened as a scientific reserve in 1995. It is owned by the Port Nicholson Block Settlement Trust, governed by the Harbour Island Kaitiaki Board and managed by New Zealand’s Department of Conservation. Here, visitors have the chance to immerse themselves in a pest-free ecosystem that contains many of New Zealand’s native species. Kakariki (Cyanoramphus spp., which are small, green parrots), little blue penguins (Eudyptula minor), and giant weta (Deinacrida spp., which are large insects and a primary food source for tuatara) can all be seen while hiking the trails. This is also where I spotted the first wild tuatara I have ever seen, slowly emerging from its burrow on the sunny slope of a cliff. 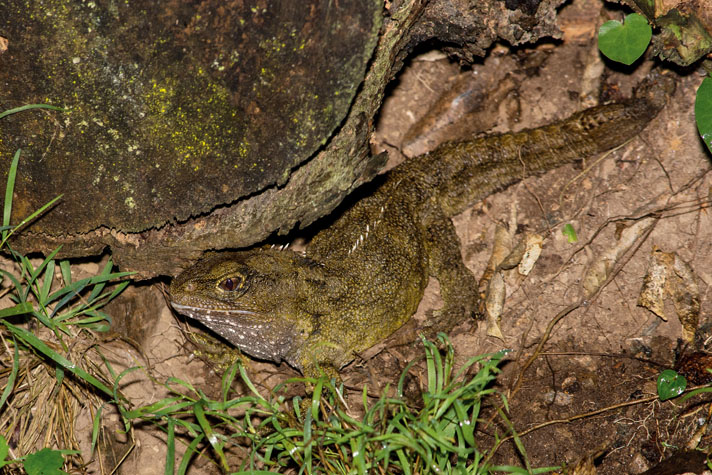 A tuatara on the forest floor in New Zealand.

For those looking to view tuatara in Wellington, there are a number of zoos and museums that display them. But probably the best place to view tuatara is Zealandia. Situated right outside of central Wellington, Zealandia is an ecological restoration project for the ages, which boasts easily accessible wildlife one would be hard-pressed to find elsewhere.

A fence built to keep rats and other pests out surrounds the entire sanctuary, allowing the native fauna within to thrive. During the day, visitors can find tuatara lined up along a cliff face, basking in the sun as close as three feet away. During a night hike, you can also look and listen for kiwi (Apteryx spp.) and spot glow worms (Arachnocampa luminosa), all while finding more tuatara. 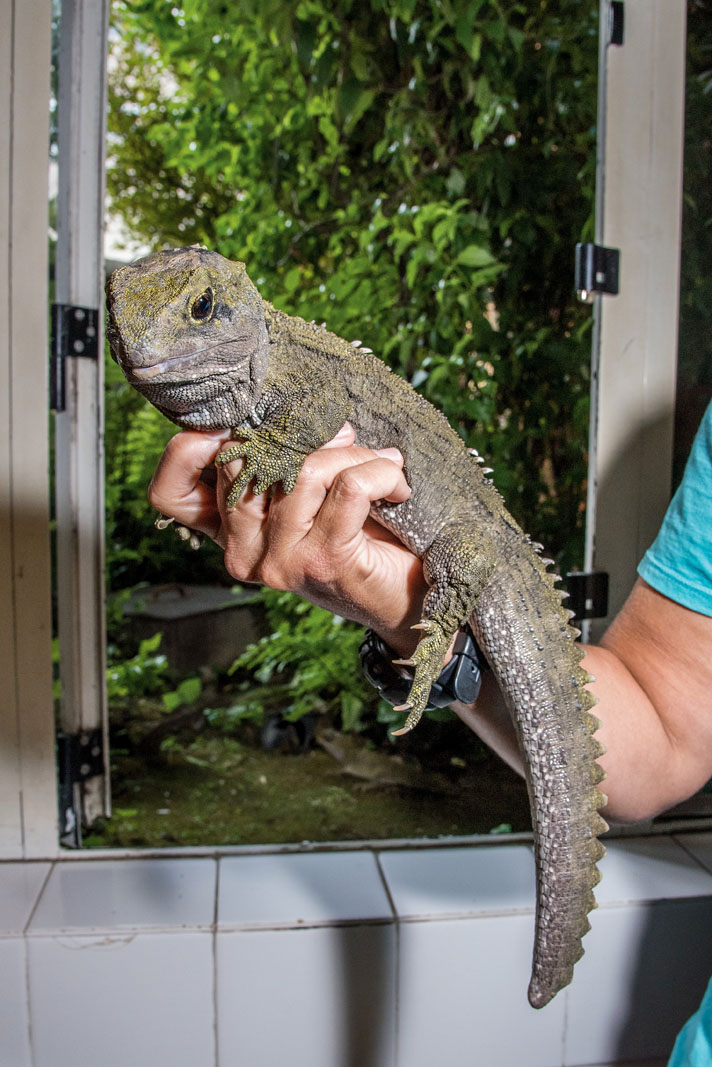 The author with a tuatara.

It’s easy to see why foreigners like me acquire such a fascination with tuatara, given their unique natural history. The locals, however, have held tuatara in high regard for quite some time. Many Maori, the original human inhabitants of New Zealand, consider tuatara to be a treasure species and believe them to be the guardians of knowledge. They even play a role in contemporary New Zealand culture, having been on the 5-cent coin until 2006, when it was taken out of circulation. All throughout the country, tuatara are continually represented and symbolic of the distinctive wildlife that call New Zealand home. 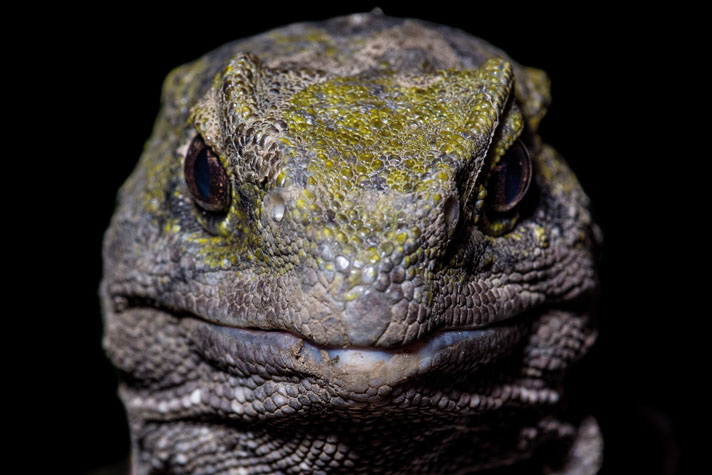 Male tuatara lack penises, and these reptiles breed much like some birds, via a “cloacal kiss.”

Time and isolation have lent tuatara a unique classification in this world, unlike anything else seen for millennia. Some people refer to them as “living fossils” for this very reason. To view them as fossils, though, would be to disregard their tenacity to cope with change. Tuatara are survivors, not minerals buried in the ground, and they have evolved to cope with these changes over time. With a little bit of luck and the dedication of many hard-working people, they will continue to survive so that we can admire them for generations to come.

Alex Wiles is a conservation photographer and environmental educator based out of Omaha, Neb. His interest in conservation initiatives takes him around the world as he documents the challenges faced by wildlife and the work of those who wish to protect it. Visit his website at awilesphoto.com.