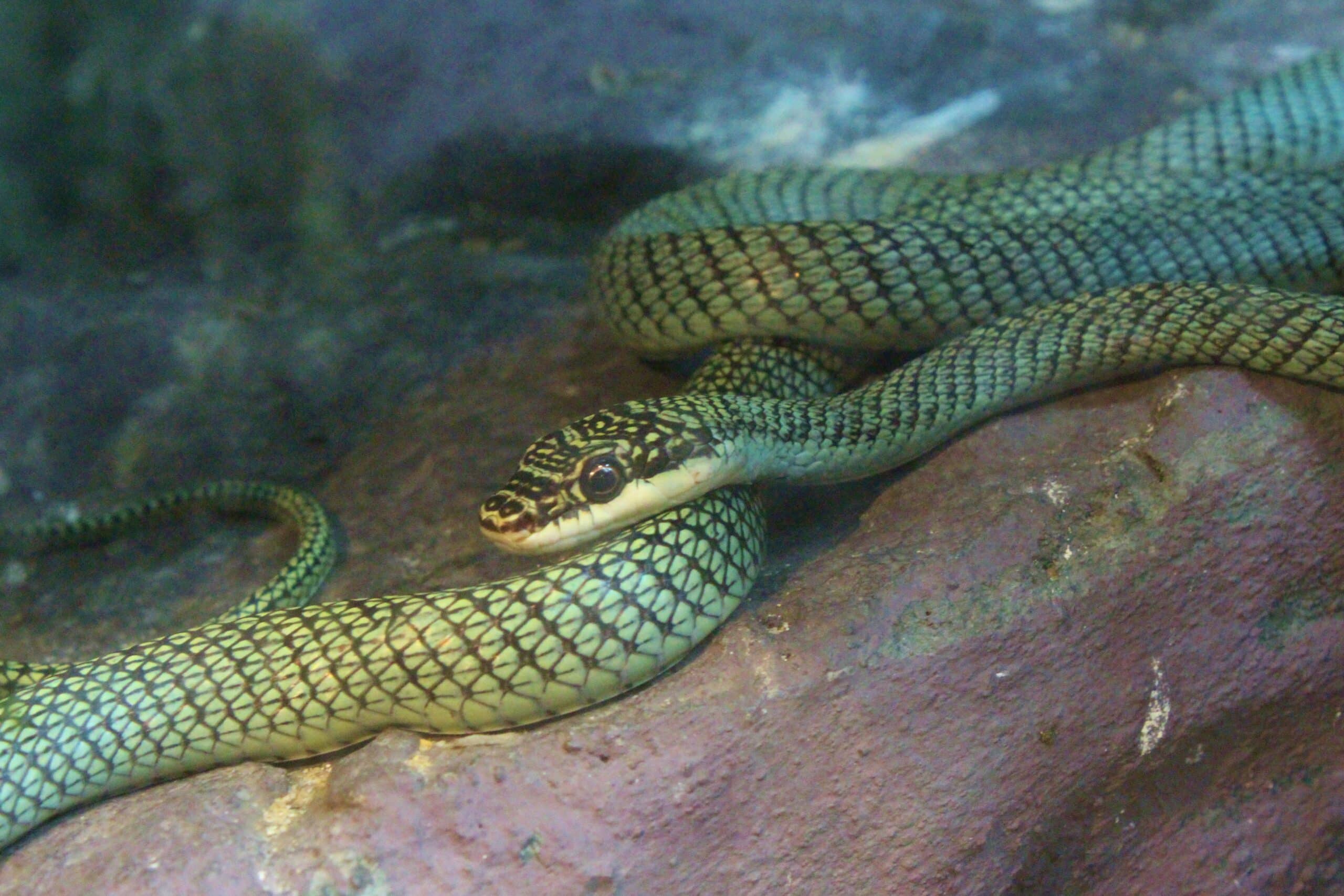 The Snake Farm And Dusit Zoo In Bangkok, Thailand

Editor's Note: Bangkok, Thailand is home to a huge number of reptiles and has numerous zoos for residents and tourists to see the animals up close

Editor's Note: Bangkok, Thailand is home to a huge number of reptiles and has numerous zoos for residents and tourists to see the animals up close and personal. BirdChannel.com writer Kenny Coogan gives his account of a trip he recently took to the Bangkok Snake Farm and Dusit Zoo.

After landing at Bangkok’s International Suvarnabhumi Airport, I hopped into a taxi and went straight to the snake farm sponsored by Queen Saovabha Memorial Institute (QSMI) and Thai Red Cross Society.

Video: Croc Nearly Makes A Meal Out Of Handler

Opened in 1923, the serpentarium breeds venomous snakes to produce anti-venom. Thailand has approximately 200 species of snakes, with around 60 venomous species. Half of the venomous snakes are aquatic and often do not pose problems with humans. The snake farm currently produces anti-venom for the seven most common snake bites. QSMI is studying the possibility of cross reactivity and protection.After landing at Bangkok’s International Suvarnabhumi Airport, I hopped into a taxi and went straight to the snake farm sponsored by Queen Saovabha Memorial Institute (QSMI) and Thai Red Cross Society.

After paying 200 Baht to enter (roughly $6 USD), I visited the outdoor exhibits that consisted of either large pits or mesh enclosures. The sizes of the exhibits were exceptional, allowing the multiple snakes in each enclosure room to hide, climb, bask or soak. Stadium seating for school groups and educational demonstrations were to one side of the exhibits. 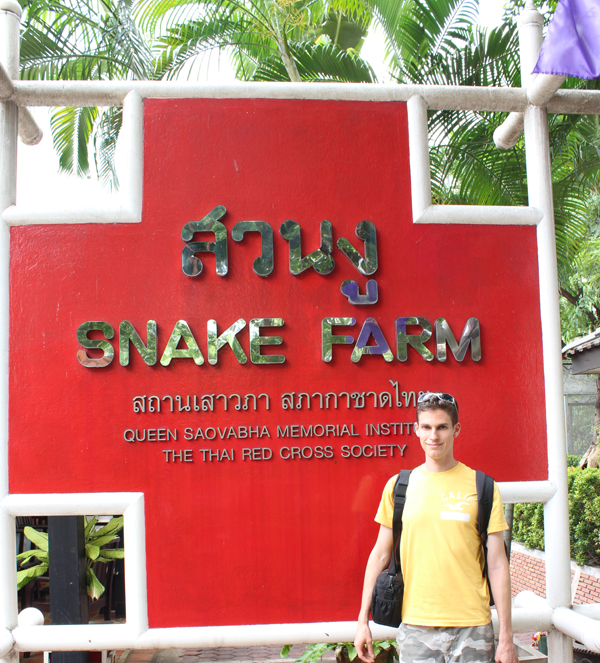 I visited during the slow tourist season for Thailand, in June. I was one of 20 guests during my two hour visit. Despite the slow season, the snake farm sees more than 40,000 guests a year, 60% of which are foreigners.

After enjoying the outdoor exhibits, I was excited to learn that there was more inside. I entered a five-story building, of which only the first two levels are accessible to visitors. The first and second floor serve as an exhibition area for 35 species of snakes, including a 100-seat arena for venom extraction. 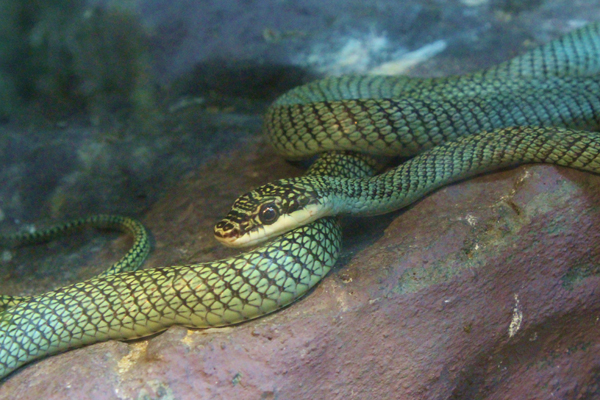 The second floor is an interactive museum with displays regarding snake evolution, anatomy, life cycle, reproduction, toxicology and how to respond to bites using first-aid. The majority of signs were written in both Thai and English – something not to be overlooked.

My second day in Thailand, I visited the Dusit Zoo, also located in Bangkok. While the zoo had a mix of old fashioned and modern enclosures, I was once again impressed with the herpetology building. The people of Thailand must love herps! 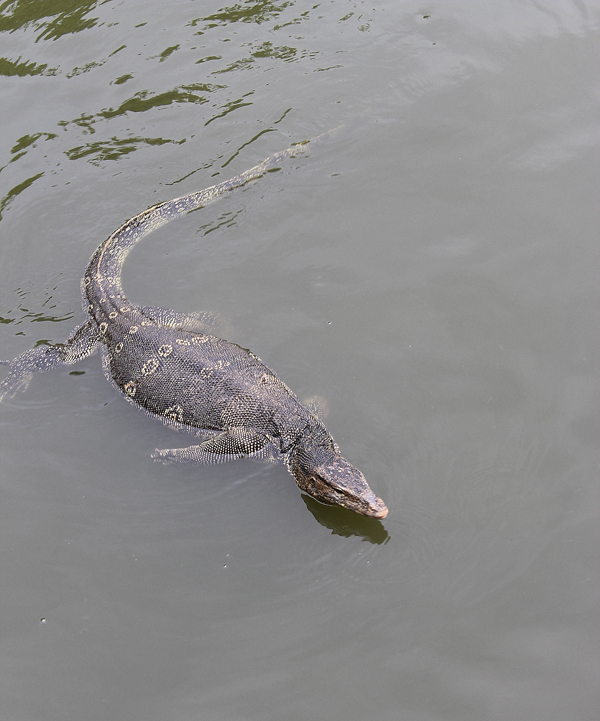 Asian water monitor (Varanus salvator) swimming in the lake at the Bangkok Zoo.

As I walked around the zoo I was cautioned by multiple signs to not feed the wild lizards. By the manmade lake inside the zoo where, for a small fee, you can go boat paddling, the signs became even more apparent: “Do not approach lizards while in boat.”

Coming from Florida, I thought the wild lizards were Tokay gecko or knight anole size. After walking over a bridge, I spotted my first wild water monitor (Varanus salvator) appropriately under a sign identifying itself. The monitor swam toward a large drainage pipe. Once I understood the size of the lizards the signs were attributed to, I easily saw a dozen five to six foot water monitors swimming, basking and even mating. Outside of the zoo I saw a few more lizards near low trafficked canals.

Inside the reptile house at the Dusit zoo, I was greeted by mostly native herps in furnished enclosures that transported you to their native ecosystem through the use of artificial and real plants, streams, ponds and rock work that extended out to the guests area.  After leaving the air conditioned building, there was a path that meandered by turtle, tortoise and crocodilian habitats, including a false gharial.

If you find yourself in the most populous city of Thailand and love herps, visit Bangkok’s zoo and snake farm.