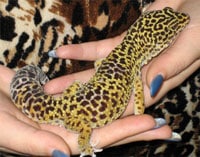 The Poison Dart Persuasion
Close Encounters Of The Toad Kind
In The Beginning, There Were Toads…

A herp that I have always aspired to keep since I was a kid was the leopard gecko. I remember writing a ridiculously long alphabetical list of pets that I some day wished to keep, with one or more animals beginning with each letter from A to Z. The letter “L” of course, was reserved for the leopard gecko, but also had other candidates including the lemur, legless lizard, lobster and llama. However, long before owning my first leopard gecko, I came quite close to owning a blue lobster, but that is a story for some other time and place. (Is there a LobsterChannel.com? Does anybody know?)

Anyway, several years ago I was browsing through the reptile supplies category of eBay (a daily habit, I must confess), and I came upon the auction of a lifetime. Someone was selling two leopard geckos with a cage and supplies, and they were close to my home! I soon became the lucky winner, and went to pick them up on the following weekend. They had been living together harmoniously, and were both friendly and healthy looking. I discovered the curious fact that they were both male only afterwards!

The pair was nameless at the time, so I went about selecting suitable titles for them. Being a fan of the music group Metallica, I went with the name Orion for the largest one, and then keeping with the celestial theme, I chose Nova for the smaller one’s name. My boyfriend, on the other hand, had already picked different names of his own. He was calling them Gert B. Frobe and Dingus Squatford Jr., which I don’t think fit them at all, since they weren’t in the witness protection program or hillbillies. Besides, how could they ever get a job with names like those?

Maybe a year or two later, I found a female leopard gecko for them while stopping to buy crickets at a local pet shop. She appeared to be about the same size as they were, and had big, beautifully expressive eyes. Completing the cosmic theme, I named her Nebula.

All three leopard geckos have gotten along surprisingly well, considering that males are known to fight with each other. They have skirmishes quite infrequently, and hardly have any issues at all. They will sometimes nip at each other a bit, and play tug of war with the same cricket or occasional super worm, but otherwise remain close pals. With their choice of separate hide boxes, they often sleep together, side by side, instead of apart.

I soon noticed that Nebula was spending a lot of time near the water bowl, and she even started taking naps inside of it during the day. I never did see her drinking more than what is normal, but she seemed to enjoy walking through it constantly and laying in the water a lot. So I got her a small waterfall (also on eBay), and it was like an adored and cherished Christmas present to her. She spent so much time on top of it and soaking in that thing that I thought I had mistakenly bought a water dragon with spots. If a reptile supply company ever made scuba gear for geckos, I think she would be their first customer! Partially because of her big water obsession, I eventually redecorated their cage and removed the waterfall, since I didn’t want a water-logged leopard gecko. I then replaced it with a big tree stump shelter with moss inside. Currently they just have a water reservoir with a smaller basin, so Nebula cannot emerge her entire body in the water. Now she just drapes her body over it to nap, and can only put her face and hands in the bowl, and can’t go “overboard” like before.

Each of my leopard geckos has his or her own personality and quirks, and they are quite amusing to watch. Because I’m more of a night person anyway, I still get to see plenty of their nocturnal behavior, so I don’t feel that I am missing anything. Being that they are a very popular “beginner species” only made them that much more desirable to me, as their ease of care and hardiness is a very positive attribute to have. So with that being said, I recommend them to all herpers, from beginners to experts. They are a fun and rewarding species to own, whether you have a normal phase, a special morph, or some other type, such as an aquatic version!