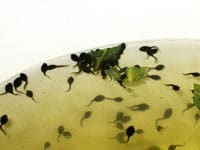 Memories of an American toad tadpole and toadlet overload.

As spring leads into summer, I am reminded of a time a few years back when I cared for thousands of “rescued” American toad tadpoles. It turned out to be a much more ambitious task than I initially thought it would be, and left me overwhelmed and very appreciative of Mother Nature’s role in everything.

A coworker had informed me that toads had been frolicking in the water-filled tarp covering her pool, and there were tadpoles everywhere. She also told me that the pool guy would be arriving within the next couple of weeks to pump out all of the water, and the tadpoles along with it, so if I wanted to save them, I’d better hurry!

The next weekend I gathered some supplies and headed over to her house. Upon arrival, I saw that the pool was a huge, in-ground variety and contained several feet of water and what looked like hundreds of thousands of tadpoles of all sizes. I also deduced that there was no way that I could collect and care for them all. After netting a bucketful of what I would soon discover was way too many, I headed home to set them up.

I ended up splitting the group into two buckets to lessen crowding and added aeration and live floating pond plants from the pet store. I then used a third bucket to assist in the nearly nightly water changes, and various containers for aging large quantities of water to make it safe to use for the tadpoles. All of this took place in my foyer, which soon looked like a mad scientist’s lab, complete with mysterious bubbling sounds and tubing everywhere.

My new full time job included constant feedings and water changes. It was full of late shifts, hunched over buckets looking for those that had become ready to leave the all-water habitat and move on to the partial land one. I would move the now four-limbed “finished products” to a final all-land setup. This overall metamorphosis from tadpole to toadlet was a miraculous and wonderful thing to witness.

I soon had toads in every stage of development, and this made it even harder to keep up with them. I now had the new problem of finding suitably tiny live food items for all the hungry toadlets. Everything outside that I could find was too large, even the smallest of black ants. Then I went to the pet shop and bought “flightless” fruit flies. These turned out to be the biggest nightmare that I have ever encountered. Trying to let out only a few flies from a vial and into a container of waiting toads was mission impossible. The first time I opened the vial, they exploded like an atom bomb in my face. Then I was headed back to the store for another $9 vial of flies and my kitchen was home to 8 million new free-range pets. Quite a lovely experience, I recommend it to all.

I quickly discovered that the toadlets also found it difficult to catch the flies, and I was having a hard time keeping them alive. It was breaking my heart to see this, so I made the decision to start releasing them. I began taking groups of toadlets to a marshy area nearby, and watched as they hopped off into the woods, to begin fending for themselves.

I continued to check with my coworker to see if the pool guy had come yet, and miraculously, he had not, and they decided not to open the pool that year after all. Obviously, my original plan to “come back for the rest of them” was not going to be possible. She told me that her family had been taking bucketfuls of tadpoles down to a nearby pond, and had not seen any more in the pool. This was the first time that she had mentioned this pond, and the fact that I hadn’t needed to rescue any of them. They could have simply transferred them to this pond instead of my house!

Had I known how time consuming and stressful the job would be, I probably would have reconsidered what I was getting myself into. However, even though it was very hard work caring for my bucketfuls of bufos, they produced tiny, beautiful results. It will be an experience that I will remember for the rest of my life.