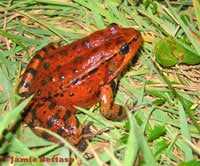 A federal judge in San Francisco has ruled that golfers, the threatened California red-legged frog (Rana draytonii) and endangered San Francisco garter snake (Thamnophis sirtalis tetrataenia) are coexisting at Sharp Park, refusing to grant an injunction that would have stopped golf course operations at the city owned park, according to a report in the San Francisco Chronicle. U.S. District Judge Susan Illston refused to stop golf course operations at the 81 year old golf course that was built on a wetlands, saying that the environmental groups did not show a need for court intervention before their lawsuit goes to trial this summer. Illston also cited "undisputed" evidence that the red-legged frog population at the park has increased over the course of the last two decades, in part due to the city's monitoring of the park's pond's water levels to ensure the frog's success. 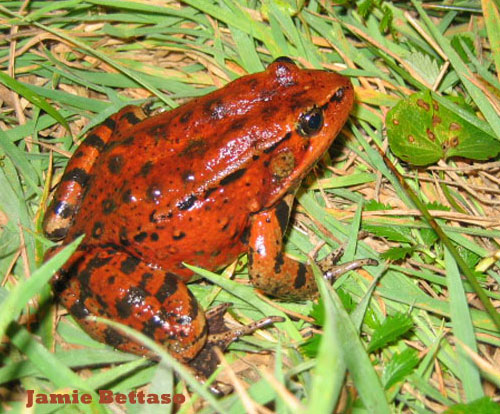 Environmental groups led by Wild Equity Institute claim that the golf course is destroying the habitat of the frogs and garter snake and sought an injunction to stop golf course operations and more importantly, the pumping of pond water where the institute claims the frogs lay their eggs. The California garter snake, which feeds primarily on the California red-legged frog, was last observed at the park in 2008.

City supervisors are contemplating whether to continue maintenance of the golf course or convert it to parkland, which could occur by transferring the park to the federal government. Meanwhile, a public hearing is scheduled for December 5 for those who wish to voice their opinions on the future of the golf course, the California red-legged frog, the San Francisco garter snake, and the park. The hearing is scheduled to take place sometime during the hours of 10 a.m. and 2 p.m. in room 250 of San Francisco City Hall. Speakers will have 2 to 3 minutes each to speak out on the issue. The hearing will heard by the City Operations and Neighborhood Services (CONS) Subcommittee of the board.

The San Francisco garter snake was placed on the Endangered Species list in 1967. It has been estimated that only 1000 to 2000 adult snakes remain in the wild. It feeds primarily on the California red-legged frog and can be found in densely vegetated bodies of water with ample areas for basking.