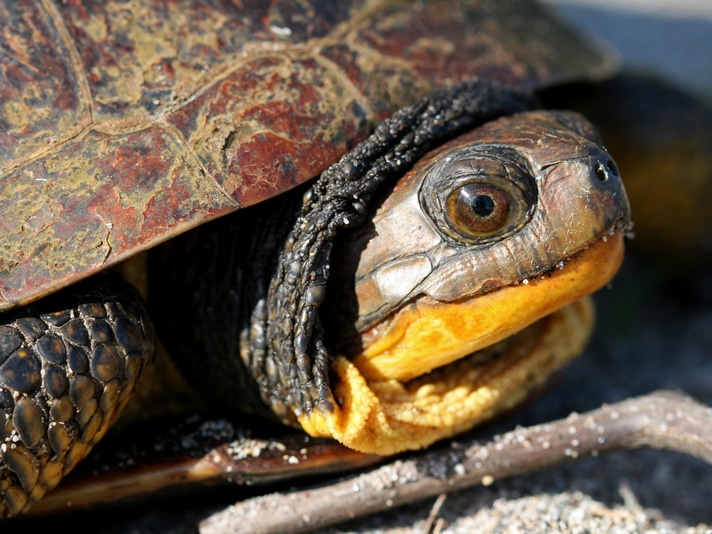 The Blanding's turtle adoption program will enable scientists to determine the best locations for restoration of the species.

The endangered Blanding’s turtle (Emydoidea blandingii) in Illinois is getting some love in Geneva, Illinois as the Kane Forest Preserve District has launched an “Adopt a Turtle” program in an effort to raise money, awareness and to help the endangered reptile to recover.

The program has several adoption options designed to help the turtle without the adoptee taking possession of the animal.

They include a “Team Turtle” level at $115. Those who adopt at this level will receive a certificate of adoption, naming rights for the animal, a photo of the turtle, a Blanding’s turtle hat, sew-on patch, acknowledgment on the Kane Forest Preserve website, and conservation updates on the species.

The Blanding’s Backer level, ($75) gets you a certificate of adoption, a photo of your turtle, sew-on turtle patch, and acknowledgment on the Kane Forest Preserve website.

Blanding’s Turtle Gets Some Assistance in Indiana

Adopting a turtle gives the experts a chance to track populations of the species and determine where in Kane County make the best spots for restoration work.

"We are still working to learn more about their distribution in Kane County and measuring population size and structure," Bill Graser, a wildlife biologist with Kane County told the Daily Herald. "We've documented several new locations in Kane County in the last few years, which is a positive sign — but we're still dealing with relatively small numbers of individuals. These populations are vulnerable to local extinction. Any time a turtle is lost to mortality, natural or human caused, it's a big loss to the population."

The money raised from the program will also help to hire interns, purchase equipment, and to analyze data collected on the species.

"We use the telemetry data to guide the timing and location of land management efforts to maximize the benefit to the turtles and other species while minimizing the chances of harming the turtles," Graser said. “All the data collected helps direct management decisions.

"When we protect and improve habitat (for Blanding's turtles), many other species reap the benefits, too. If you have a Blanding's population that is doing well, other wildlife will be doing well."

More information on the adoption process can be found here.