1. Pyramiding Pyramiding of the carapace scutes is the most common problem with captive African spurred tortoises (Centrochelys [Geochelo

Pyramiding of the carapace scutes is the most common problem with captive African spurred tortoises (Centrochelys [Geochelone] sulcata). A diet too high in protein has long been blamed for this condition, but this diet may only exacerbate things. According to C.S. Wiesner and C. Iben, the main problem may be caused by too low humidity. Whatever the case, avoid high-protein diets because they can cause obesity and kidney problems, including renal failure. 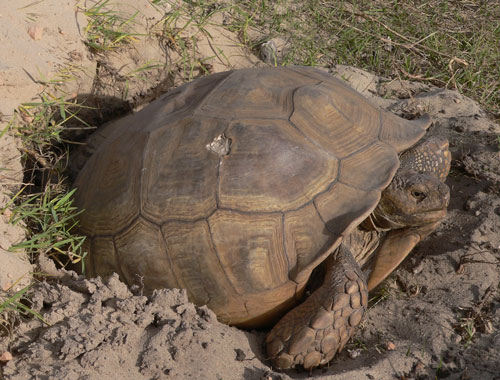 Wild sulcatas spend a good deal of time in microclimates where the temperature is lower and the humidity is higher than the surrounding area.

Sulcatas kept on too wet of a substrate can develop bacterial or fungal infections of the plastron and skin. If you see lesions (such as white patches) or loose scutes, or if you detect a foul smell coming from the skin and shell, contact a herp veterinarian for advice and proper treatment. Usually you have to correct the environmental conditions and treat the affected areas.

Because these tortoises come from arid, hot habitats, people often make the mistake of keeping their tortoises very dry. This danger is especially prevalent with hatchlings kept in cages too small. To get the cage and basking area hot enough, keepers end up drying out the pen and the tortoise.

Remember that in the wild these animals spend a good deal of time in burrows or buried under vegetation in a microclimate where the temperature is lower and the humidity is higher than the surrounding area. This is especially true of hatchlings, which are most susceptible to dehydration because their skin isn’t as thick among other things. Also, the wettest times of the year in the wild are when food is plentiful and tortoises grow the most. Humidity is higher during these times, and the chances of standing water are greater.

Heartwater is an infectious disease caused by the bacteria Cowdria ruminantium. It affects cud-chewing mammals, including but not limited to cattle, sheep, goats and deer. The mortality rate is said to be 40 to 100 percent of infected animals.

Common in Africa, the disease spreads via ticks of the genus Amblyomma. In 1999, 15 African bont ticks that tested positive for heartwater were found on imported leopard and sulcata tortoises. This resulted in a ban on the importation of leopard tortoises, Bell’s hingebacks and sulcatas in 2000.

Because ticks, not tortoises, carry the disease, a temporarily erected interstate movement ban was lifted in July of 2000. Interstate traffic of sulcatas and the two other tortoise species is allowed as long as a health certificate from an accredited veterinarian stating that the tortoises are tick-free accompanies the tortoises. If you buy or adopt a tortoise from outside your state, the sender will need to obtain this health certificate, and it will likely cost you $15 to $25.

Want to read the full story? Pick up the May 2009 issue of REPTILES, or subscribe to get 12 months of articles just like this.