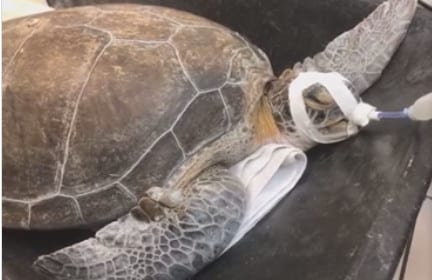 Splinter is in recovery after the 3-foot long spear was removed from her body.

A green sea turtle (Chelonia mydas) that was found with a 3-foot spear in its neck underwent a successful surgery and is doing much better now that the spear was removed.

Update on Splinter, sub-adult green sea turtle speared😞🐢! No words for this horrific act. All species of sea turtles in and around the United States are protected by Federal and State Laws. It is a felony to touch or harm a sea turtle in the United States. Please share this video and help us educate the general public. 😞🐢💗

Posted by The Turtle Hospital on Saturday, September 7, 2019

Dr. Douglas Mader of the Turtle Hospital in Marathon, FL removed the spear from the sub-adult reptile, named Splinter. Splinter was found in Key Largo with the spear protruding from its neck,  The team at the Marathon Hospital used an endoscope and determined the spear did not hit any vital organs and went through just muscle, according to a video posted to the Turtle Hospital’s Facebook page. Dr. Mader and team used a copper sheath from Home Depot to safely cover the spear so the barb would not engage as the spear was removed from the turtle’s body. Splinter is now on broad spectrum antibiotics and is recovering at the hospital. Dr. Mader wrote a column for REPTILES magazine for 23 years.

The hospital is urging anyone with any information on the spearing of Splinter to come forward. A reward is being offered as well.

Posted by The Turtle Hospital on Sunday, September 8, 2019

The green sea turtle is, like all sea turtles, a federally protected species. It is a felony to touch or harass a sea turtle. if you have any information on this crime, please contact The Turtle Hospital.